What The Hell Is Going On With Britney Spears? 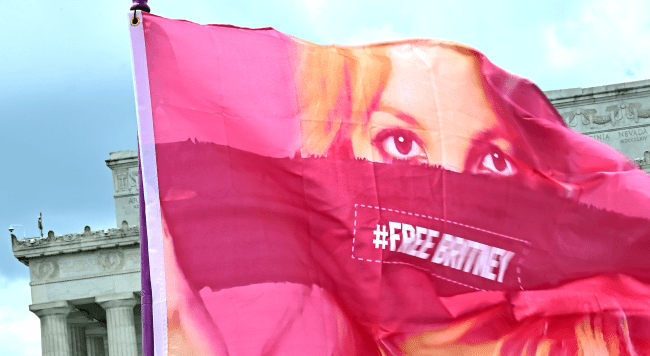 Ever since Britney Spears headed back to court in June to try and end her conservatorship, run by her father Jamie Lynn Spears, a lot of bizarre things have been posted to the singer’s social media accounts.

The whole ball of weird got rolling back in February with the airing of the documentary Framing Britney Spears on FX.

The documentary took a hard look at how Britney Spears’ life has been run by her father, and reignited the Free Britney movement.

Spears’ social media accounts have always been a little strange, but starting with her response to the numerous documentaries about her Britney has really dialed up the WTF factor.

“2021 is definitely way better than 2020 but I never knew it was gonna be like THIS!!!!” she wrote. “So many documentaries about me this year with other people’s takes on my life … what can I say … I’m deeply flattered!!!! These documentaries are so hypocritical … they criticize the media and then do the same thing.”

Then in June, after news of her conservatorship battle made headlines, Spears wrote, “I don’t want people to think my life is perfect because IT’S DEFINITELY NOT AT ALL … and if you have read anything about me in the news this week … you obviously really know now it’s not!!!! I apologize for pretending like I’ve been ok the past two years … I did it because of my pride and I was embarrassed to share what happened to me.”

A couple of weeks, and numerous dance videos later, Britney wrote, “For those of you who choose to criticize my dancing videos … look I’m not gonna be performing on any stages anytime soon with my dad handling what I wear, say, do, or think!!!!”

She continued, “And no I’m not gonna put on heavy makeup and try try try on stage again and not be able to do the real deal with remixes of my songs for years and begging to put my new music in my show for MY fans … so I quit!!!! I don’t like that my sister showed up at an awards show and performed MY SONGS to remixes !!!!! My so-called support system hurt me deeply!!!! This conservatorship killed my dreams … so all I have is hope and hope is the only thing in this world that is very hard to kill … yet people still try!!!!

“I didn’t like the way the documentaries bring up humiliating moments from the past … I’m way past all that and have been for a long time!!!! And for women who say it’s weird the way I still have hope for fairy tales … go f–k yourself!!!!! As I said … hope is all I have right now … you’re lucky I post anything at all … if you don’t like what you see, unfollow me!!!”

Then, for some reason, beginning on July 23, Britney Spears decided to start posting a series of photos of herself topless, covered only by her hands.

Four days ago, Britney posted this…

Then, after posting her fourth topless photo over the past two weeks, fans began to get even more concerned than they normally are.

“Something suspicious is going on,” wrote one fan.

“I feel these are being posted my someone else,” another commented.

On Tuesday, things, somehow, got even stranger when Britney posted a photo of her bathroom door with a rambling story about how she locked herself in the bathroom.

“At 2am I decided to take a bath!!!!,” Spears wrote on Instagram. “I got a new scented lotion from Victoria’s Secret and I wanted to wear it because it helps me sleep better!!!!

“I went to the bathroom and looked at my leftover coffee from earlier in the morning and said ‘gross’ but didn’t throw it away and then I looked for my face wash but couldn’t find it anywhere!!!! I was caught up in my head looking for it for about 15 minutes and then realized it’s probably in the other bathroom … then I went to leave and the door was locked … I thought ok well it’s a bathroom, I can open the damn door … no, the lock was stuck!!!! I got locked in the f—ing bathroom and my boyfriend was sleeping … even if there are earthquakes he doesn’t wake up!!!

“I cleaned the bathroom and thought about taking a shower or something but then I saw it … the door … I just looked at it for the first time with a yearning of just wanting it to open … would my eyes trick me and make it happen faster??? My eyes widened and the door was more clear … more vast … I could see it with clarity and brightness … please open door!!!! “

“‘We’re here!’ They said … I asked how long it would take to open … and they said ‘oh, maybe 10 minutes’!!!! The old coffee I had left over from the morning was there … I started feeling foggy so I drank it … I was reenergized and started speaking again!!!

Two hours later she posted a video of herself with a pig.

An hour after that, she posted a video of herself modeling bathing suits in Maui.

Naturally, fans had thoughts, including Miley Cyrus, who commented, “They Free’d Britney for real!”

The mini story that BritneySpears wrote today on her IG reminds me of the day they claim false narrative about the locked 🔒 bathroom 🛁 incident in 2008. What happened that day? And today the door 🚪 was finally opened. She never has a chance to talk about what happened to her. pic.twitter.com/uJmxxTF0zg

Does she, in the end, suggest she opened the door with her mind? Surrealist poetry.

Excited to announce that I will be writing the screenplay for the 16 episode limited series Metaphor For Her Life Right Now: the Britney Spears Bathroom Ordeal. pic.twitter.com/5duQc3NQp7

Others believe the entire story was a metaphor for ending her conservatorship.

Britney Spears conservatorship Reading this new article about Britney getting locked in her own bathroom for hours thinking About how they can make her look crazy in court pic.twitter.com/KlOrakqvG7

A hearing on Jason Rubin, Britney’s choice to take over her conservatorship, is set for December 13. Maybe we will all get some answers then.