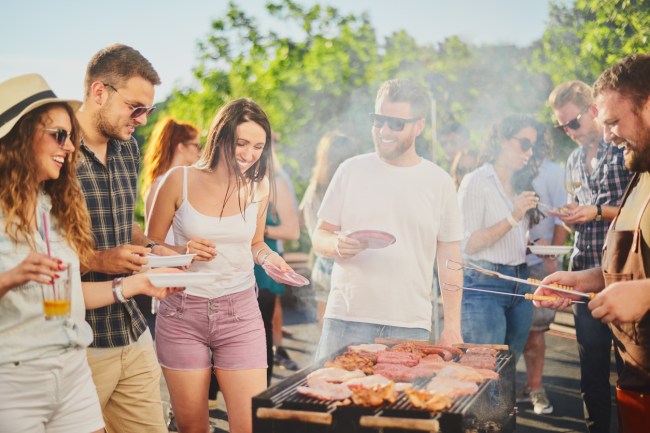 As you head into this long weekend, it’s best to be prepared. You want to make sure you have your sunscreen, your cooler packed properly—it’s all about the ice distribution—and that you’ve taken care of your toes if you’re planning on rocking flip flops all weekend.

Gnarly toes are the worst. Everyone knows that. There’s no shame in getting a pedicure.

Of course, one of the key components to a successful Fourth of July weekend, especially when chilling on a deck at a barbeque, is music. Music makes a BBQ and everyone has their go-to tunes; the songs that are primed and ready when the aux cord comes their way.

If you’re looking for some guidance, we here at BroBible put together a list of our favorite songs to play when we’re grilling and chilling.

You can thank us later.

If you can listen to this song and still be a miserable son of a bitch then there is no hope for you. Hell, all I want to do when I hear it is move to an island and drink about a billion Corona Lights. And since the song puts me in such an outstanding mood, I might even bring my wife and kids with me.

“Courtesy of the Red, White, and Blue”—Toby Keith

When a song starts off with the lyrics “American girls and American guys,” you know it’s about to be a real banger, and considering TK’s lyrics continue by making Lady Liberty and everyone who stands on her soil sound like a real badass, it’s as if this thing should be the new National Anthem.

When you’re cooking meat and drinking beer, there’s nothing more American than blasting a little Toby to honor the red, white and blue.

If this song comes on and you’re standing near a pool with a beer in your hand then there is no chance you don’t start moving. Sure, maybe Swae Lee’s verse is mostly mumbles we can’t really understand but the beat is the definition of a summer jam. It also doesn’t hurt that Post Malone’s chorus hit is an instant “stuck in your head all day” moment.

Of all the Bruce Springsteen songs out there, “Thunder Road” may be the Bruciest.

It’s an upbeat classic with lyrics that you can scream at the top of your lungs and a guitar/sax solo that consistently melts your face off no matter how many decades go by. You’d be hard-pressed to find a song that gets the boys—nay, EVERYONE—as hyped as “Thunder Road” will.

I’m sorry, but if you don’t blast Lee Greenwood’s “God Bless the U.S.A.” on full volume on the Fourth of July at least once during the day—preferably closing it out with your own bootleg fireworks display—then did America really celebrate its birthday?

Hey, if you want to play the Old Crow Medicine Show version of this tune, that’s fine with me. You’re missing out by not having Rucker’s vocals, but in the end, we get the gist and that’s all that matters.

I hear this song and I’m good. Stuck in traffic? I’m good. An end of days thunderstorm rolling through? I’m good. An empty propane tank? Well, I’m at the very least okay.

This song puts me in a frame of mind that I usually can only dream about. I can sing along to it, I can eff up the words to it, and I can bee-bop around the deck to it and not have to worry about making an ass out of myself (which is what definitely happens when I put Lizzo on).

This song is a life raft in the angriest of seas, and for that, I am thankful.

“Sun is Shining”—Bob Marley and the Wailers

The summer is all about going outside and celebrating life with friends and family. What better song to savor the euphoria of the warm sunshine and good company than this Bob Marley classic?

If the 4th of July means one thing to me, it’s screaming about patriotism at the top of my lungs until I turn red in the face and that’s what makes this song so perfect; it’s got a chorus that anyone can sing along to even if they’re hearing it for the first time

Fact: it is impossible to road trip through the South without tossing this on the radio once you hit Tennessee. If you don’t belt out the chorus beginning with “SPEND MY DOLLAR” at the top of your lungs then you’re probably a dude who exclusively dips his french fries in mayonnaise.

You didn’t honestly think you were going to make it all the way through this without running into a DMB song, did you?

Sure, “Stay” on a summer playlist might be as groundbreaking as florals in the spring, and while I could have tried to impress you with a Little Feat deep cut, I’d be doing a great disservice to the song that perfectly encapsulates that special moment when the buzz kicks in while the grill is sizzling and the sun hits your skin just right.

If you can’t picture yourself riding a Harley down Sunset Boulevard in assless chaps when the beat drops, you just aren’t thinking hard enough.

This song makes everything and anything you’re doing feel more dope. Every time I listen to it, I temporarily pack on 30 extra pounds of bulk muscle mass and grow the inescapable urge to chop down a tree. Throw “Eminence Front” over a montage of grandmas knitting mittens and I may go out and cop myself some yarn and a Werther’s Original.

It’s a cross-generational timeless classic that, in my correct opinion, is wholly underplayed.

This is the ultimate summertime and country good-time anthem. It’s also impossible to sing the song without thinking about the ridiculous music video where Jackson goes waterskiing and water tubing in jeans and a cowboy hat.

And hey, because we care, you can find all of these songs on this fantastic Spotify playlist.