PSA: Swarms Of Cicadas Will Spend The Summer Peeing Uncontrollably On Everything And Anything 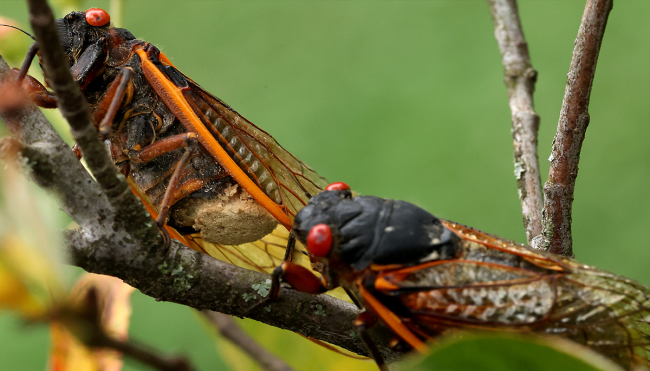 If you’ve ever roamed the sidewalks of a city in the summer, there’s a good chance you’ve had the pleasure who unexpectedly getting nailed by a random drop of liquid even though there isn’t a single cloud in the sky.

When that happens, there’s a good chance you got sniped by condensation dripping off of an air conditioner, although I’ve personally never ruled out the possibility that I fell victim to someone hocking a loogie off or a roof or taking a leak while skydiving (which, if we’re being honest, are only slightly grosser alternative to AC runoff).

However, if you find yourself in that situation in certain parts of the United States this summer, you might be able to add a new suspect to that list: cicada pee.

Last week, I discovered that many of the emerging members of Brood X will soon find themselves infected with a fungus that slowly devours their insides before taking control of their motor functions to spread the affliction with the help of some psychedelic compounds. Thankfully, those “zombie cicadas” pose no threat to humans, and based on basically every article I’ve read, the consensus is that the bugs are about as harmless as they come.

However, there is one fairly notable exception. The Washington Post spoke to a couple of etymologists at the University of Delaware who explain cicadas rely on consuming fluid from trees to stay cool during the summer—a practice that also “forces them to pee liberally.”

The outlet describes cicada urine as “watery tree sap” and the scientists say you’ll experience the same feeling as getting hit with a drop or two of rain if you’re on the receiving end. Thankfully, it’s basically sterile and won’t cause any ill effects aside from, you know, having to deal with the fact a cicada just peed on you.