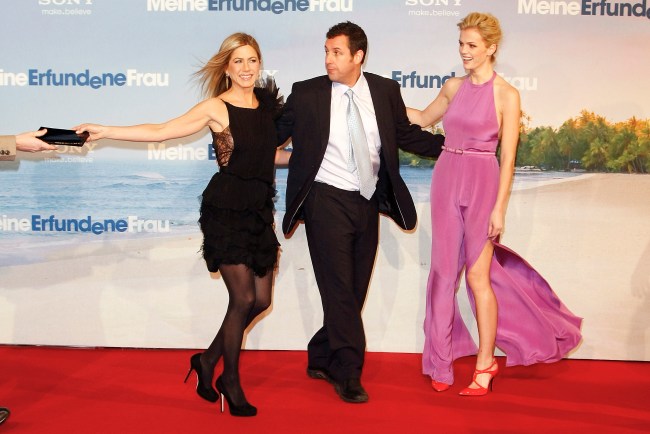 [sips white wine with pinky out]

[pauses the season finale of The Bachelorette]

OMG KAREN, you will never guess who THE BEST KISSER IN HOLLYWOOD IS.

Truth be told, I could give a runny poop less who can move their lips in a rhythm that is perceived as sexy, but when I heard it was Adam Sandler, I gotta hand my man the W.

Brooklyn Decker appeared on Watch What Happens Live with Andy Cohen last night and revealed that Adam Sandler, who she co-starred with in the movie Just Go With It, is known in Hollywood circles as being a good smoocher.

“Adam Sandler is a good kisser. And other actresses have said the same thing. They have come up to me, other actresses who have kissed him, and said, ‘Hey, so…good, right?’”

“I have to say with Adam, I was taken aback by how good of a kisser he was. He’s a great kisser. He’s also a gentleman which I think makes the whole experience just nice,” Decker explained. [via DECIDER]

This makes me happy. If I were to make a pie chart of my personality it would be 25% Happy Gilmore quotes, 20% Billy Madison, 20% Wedding Singer, 10% Big Daddy, 5% Alcoholic, and 5% Awful at Math. Sandler was the mind behind some of the most timelessly funny movies of all-time but in the past decade his movies have been so bad I refuse to even throw them on in the background when I try to finger my Tinder date. Sure, Sandler’s worth a billion dollars but the receptions movies like Grown Ups 2 and Jack and Jill received had to take a toll on him.

So here’s to a well-deserved victory for Sandler, the best kisser in Hollywood. Besides Steve Buscemi of course.