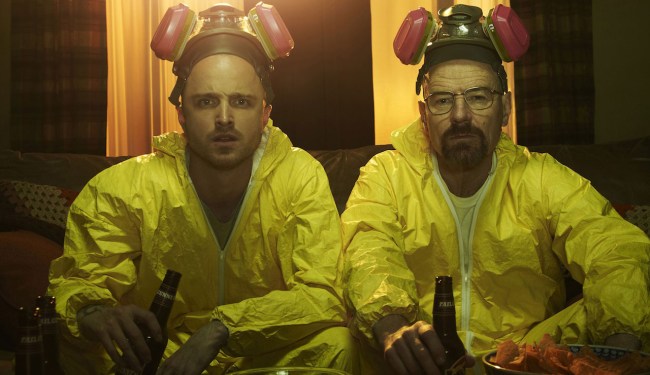 Ever since the announcement of the Breaking Bad sequel movie earlier this year, it’s been all quiet on the Albuquerque front as nothing beyond Aaron Paul’s return as Jesse Pinkman has been confirmed.

Despite being asked about the iconic character of Walter White in essentially every public appearance he’s made since the announcement, series star Bryan Cranston has largely been aloof on the matter, replying with half answers and riddles when questioned about a potential return to the role.

But if Cranston’s latest Instagram post is any indication, the time for intentionally playing dumb has come to an end, as he recently posted a photo of two donkeys with the caption “Soon” — an image that is identical to one posted by Breaking Bad co-star Aaron Paul at the same time.

The tease from Paul and Cranston comes just weeks after the Emmy and Tony Award-winning actor was coy about his role in the film when speaking with Entertainment Tonight:

“Well, rigor mortis has a way of allowing that to happen. Could be a flashback, or a flash forward. I’m still dead, Walter White, I don’t know what [could happen],” Cranston joked when asked how Heisenberg could fit into the Breaking Bad sequel.

Given that the Breaking Bad sequel movie will follow the life of Jesse Pinkman following his escape from neo-Nazi captivity, any scenes involving Walter White will likely unfold in the form of flashbacks.

However, there are those out there who remain ardent that because we never actually saw Walter White die with our own two eyes, anything can happen at this point.

While the Breaking Bad movie currently has no official release date, fans can expect the film to drop sometime in 2020.