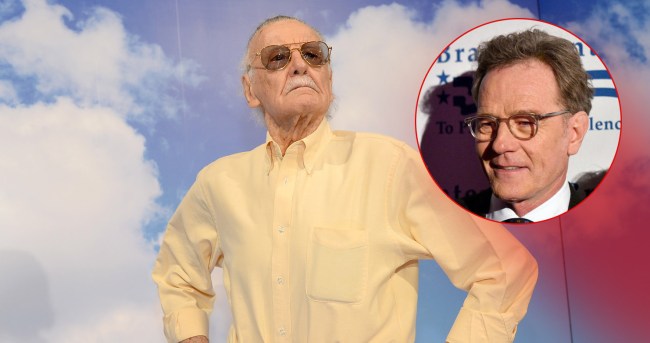 Since the passing of the Marvel Comics icon Stan Lee many of his fans on the internet have been saying Breaking Bad’s Bryan Cranston would be the perfect actor to play Lee in a biopic film of his life.

The creator or co-creator of blockbuster movie and TV superheroes like Spider-Man, the X-Men, Iron Man, Thor, the Hulk, the Fantastic Four, Black Panther, Daredevil, Doctor Strange, and Ant-Man, Lee’s life, especially from the 1960s to the creation of the Marvel Cinematic Universe, would be prime fodder for a film showing how the gargantuan franchise came to be.

In fact, one fan already created a movie poster of the potential film, inserting Cranston into the title role using a a poster from his 2016 movie The Infiltrator.

When asked whether he’d be interested in portraying Stan Lee in a biopic movie by British website UNILAD, Cranston soke about how much he admired the man.

“Yeah he was, I hate to say genius, but he was the man who had tremendous insight into how to humanise superheroes, how to make them relatable and by giving them flaws, relatable human flaws, that made them accessible to audiences.

“And so he really had a natural sense of communication and an honest authentic way of writing that material that really drew the audience in in order to really invest in those characters.

“Sure, I would be interested in looking into that if someone has an idea of how to develop a tribute movie to the amazing Mr. Lee.”

Fans were very happy to hear Cranston say he would be interested in the role.

If they make a movie about Stan Lee, he needs to be played by Bryan Cranston

Brian Cranston as Stan Lee in a biopic?? Yes please make that happen!!!

This is something that definitely needs to happen. Right, Stan?