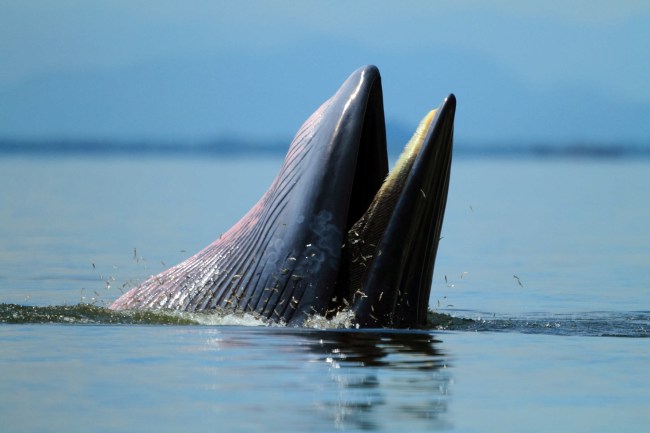 A 51-year-old diver in South Africa was swallowed headfirst by a whale while snorkeling with sharks. The diver didn’t even see the whale coming because he had his eyes trained on the sharks. After all, if there are sharks in the area that’s what you want to be paying attention to if you know what’s good for your personal safety…normally

In this instance, the divers were on hand to see a feeding frenzy during an annual sardine migration. The Bryde’s whale swooped in out of nowhere to grab a mouthful of sardines and managed to grab the diver’s head and body in its mouth in an instant.

According to Fox News, the diver almost immediately felt the pressure of the whale swallowing him followed by immediate relief because he 51-year-old Rainer Schimpf realized the whale wasn’t large enough to swallow him and he was going to be okay if he just held on. He said it was “kind of an instant relief.”

“We were very astonished that out of nowhere this whale came up,” he told Sky News. “I was busy concentrating on the sharks because you want to know if the shark is in front of you or behind you, left or right, so we were very focused on the sharks and their behavior — then suddenly it got dark.”

Schimpf, who has worked as a dive operator for over 15 years, said he was in the water with two others for just a matter of minutes before the whale appeared. He had happened to be with a group recording a sardine run, which is where marine animals such as dolphins, whales, and sharks gather fish into bait balls.

“So my next thought was that the whale may take me down into the ocean and release me further down, so I instantly held my breath,” he told Sky News. “Obviously he realized I was not what he wanted to eat so he spat me out again.” (via Fox News)

You can see the diver’s body hanging out of the whale’s mouth here:

These Bryde’s Whales can weigh up to 90,000 pounds and grow up to 55-feet in length. You’d think that would be big enough to swallow a human being whole but in this instance, I don’t think the animal was large enough.

This story had a much happier ending than the biblical tale of Jonah who was swallowed into the whale of a belly. This guy was able to swim away and be rescued, without any interference from the sharks, and now he has one of the craziest stories on the planet. He can bust this out at any bar across the world, people won’t believe him, he can then Google his own name, and probably score free beers wherever he goes.