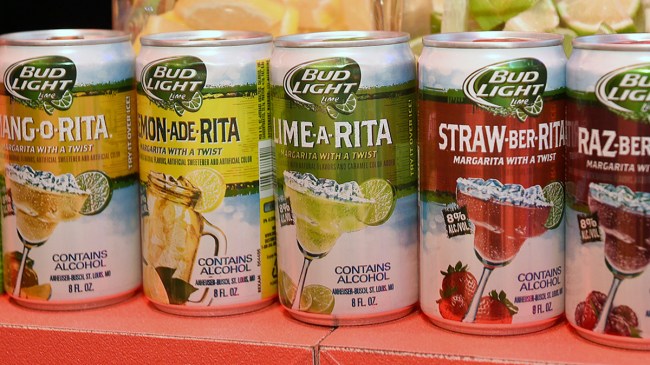 Anyone who’s found themselves halfway through a lukewarm bottle of malt liquor is likely all too familiar with the urge to figure out a way to cover up the taste once you reach what I would describe as “The Point Of No Longer Wanting To Return.”

For a long time, there was no better or more popular way to preempt that virtually inevitable moment than by drinking down to the label of a 40 of Colt 45 or Old English before filling the ensuing void with orange juice to create the concoction commonly referred to as a “Brass Monkey.”

However, the end of the first decade of the 2000s marked the beginning of a new era defined by the likes of Four Loko, Joose, and the variety of other fruity, boozy offerings that most people who’ve consumed them would probably agree are best described as “a hangover in a can.”

In 2012, Bud Light decided to ride that wave with the introduction of the “Ritas” line, which you most likely associate with the Lime-A-Rita, the 8% ABV adult beverage that serves as its flagship offering.

I find it hard to imagine there are many people out there who’ve genuinely been under the impression they were purchasing an authentic margarita by picking up a can that prominently features “Bud Light” on the packaging along with a label that makes it clear the liquid contained inside is a “malt beverage.”

However, according to SF Gate, that didn’t stop someone from filing a class-action lawsuit against Anheuser-Busch in federal court that accused the company of misleading consumers due to the absence of a “disclaimer or any other statement indicating that the margarita product does not contain tequila, or that the product is just a flavored beer.”

While it may appear frivolous at first glance, the Big Beer giant apparently decided it would be easier to settle the case out of court, which means anyone who purchased any “Ritas™ Brand Product” between January 1, 2018 and July 19, 2022 is eligible for compensation.

Based on the terms of the settlement, you’re not going to walk away with a life-changing amount of money, as the purchase of a single 25 oz. can means you’re entitled to a whopping total of ten cents (regular consumers who managed to hang onto the receipts can redeem them for up to $21.25 per household, while damages without a proof of purchase are capped at a total of $9.75).

It’s not much, but it’s also better than nothing.