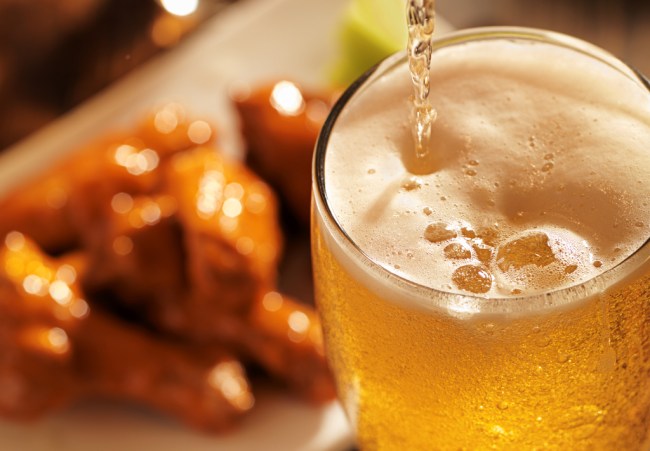 The story concerning who is responsible for inventing buffalo wings is a bit murky but most people seem to agree they were first served up at Anchor Bar, where Teressa Bellissimo (the co-owner of the restaurant in the city they take their name from) deep-fried a once-neglected part of the chicken before tossing them in hot sauce to cure the late-night cravings of her presumably drunk son and some of his college buddies.

While others have taken credit for their creation, there’s no debate when it comes to who’s behind the sauce that has basically become the industry standard, as Bellissimo turned to Frank’s Red Hot when she pulled an Emeril Lagasse to kick things up a notch after dreaming up her creation.

The company behind the sauce has long-relied on a marketing campaign that claims you can “put that shit on everything,” and as someone who has thrown a few dashes on countless foods over the years, it’s hard to argue that’s not the case. Now, a brewery in Texas has decided to take things one step forward by putting that shit into a new brew dubbed “Buffalo Wangz” that made its grand debut in its taproom on Tuesday.

It comes as no surprise that Martin House Brewing Co. in Fort Worth, Texas turned to Frank’s when they decided to step outside of the box and harness hot sauce in a beer, and while I’ve had some stouts and IPAs infused with a bit of heat in the past, I can’t say I’ve tried the sour variety the team behind Buffalo Wangz decided to go with.

The beer just rolled out and there are subsequently only a couple of ratings on Untappd as of this writing, so while it’s too early to tell if this gamble will pay off in the taste department, I’d love nothing more than to take a gamble on myself. As a result, if anyone reading this manages to get their hands on a four-pack and wants to ship some “yeast samples” to me via UPS, my Twitter DMs are open.

UPDATE: Reviews for the buffalo wing sauce beer are already coming in:

The buffalo wing sauce sour brew is killer! Warming my insides that’s for sure pic.twitter.com/yzt9enky8F

I’m towards the end of it now. Definitely drinkable but I’m not having another tonight lol. Sour on the front end and spicy as all get out on the back end (with a subtle buffalo wing sauce flavor). Very unique and tasty