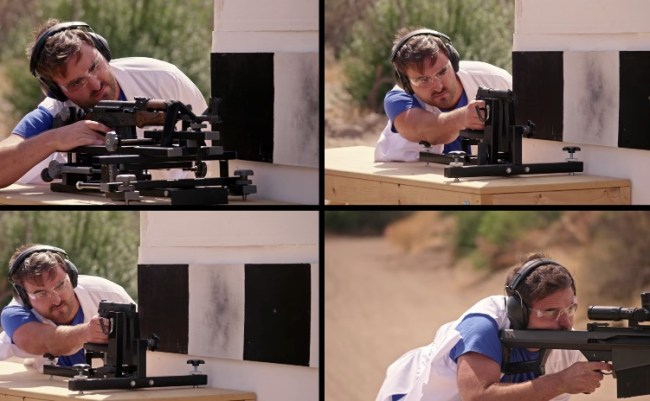 I feel like I say this once a week but The Slow Mo Guys on YouTube have some of the coolest jobs on the planet. They make a fortune on YouTube for essentially messing around and filming science experiments with slow-mo HD using their 4K camera.

For this clip, The Slow Mo Guys have gotten ahold of four guns and are firing each of the guns while filming in slow-mo HD to look at the various speeds of the shots. They’re firing a 9MM, .45 ACP, AK-47, and a Barrett .416. If you’re not into guns, really all you need to know is that these guns go up in stopping power exponentially and you’d expect the speeds to correspond. I don’t want to give away too much here so let’s just get to the video, shall we?

Can you imagine how excellent life would be if you were making $$$$$$ in YouTube revenue and your job was getting to sit around and shoot rifles all day while filming it with a 4K camera? these dudes are living the dream.

It is somewhat interesting that the 9MM is significantly faster than the .45 ACP (799 MPH vs 577 MPH). It’s also quite fascinating how the Barrett .416 absolutely blows the other guns away with a speed of 2135 MPH but I don’t think anyone expected to see anything different there, did they?