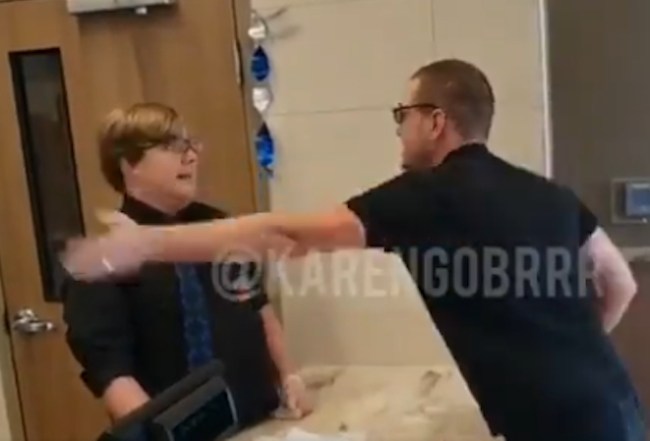 A 21-year-old from Pennsylvania is being charged with harassment, disorderly conduct, and criminal mischief after slapping a Burger King employee in a fit of rage.

Austin Addison’s tirade was caught on video after Addison complained about a female employee.

The video tweeted on Monday shows Addison standing inches from the Burger King employee’s face, ranting about a female employee who he claims, “can’t count except for robbery and stealing stuff.”

Neither men are wearing masks but that’s going to be the least of the employee’s concerns in a moment.

“She needs to get the f–k out of here before I get her put in jail for the rest of her life,” Addison barks.

The Burger King employee reminds Addison he’s on camera – possibly trying to defuse the situation and maybe get him to calm the hell down – which only pisses of “Burger King Kevin” more.

After viewing the video, it’s hard to understand how Addison didn’t get charged with assault as well.

The posted clip doesn’t show the entire incident, and a witness told TMZ,  and Addison first threw his keys in a fit. When Addison didn’t respond to the witness’ attempts to calm him down, that’s when the camera started rolling.

Addison was allegedly looking for a female employee that he knew.

According to the New York Post, Addison formerly worked at Harbor Freight Tools but wasn’t employed at the time of the incident.