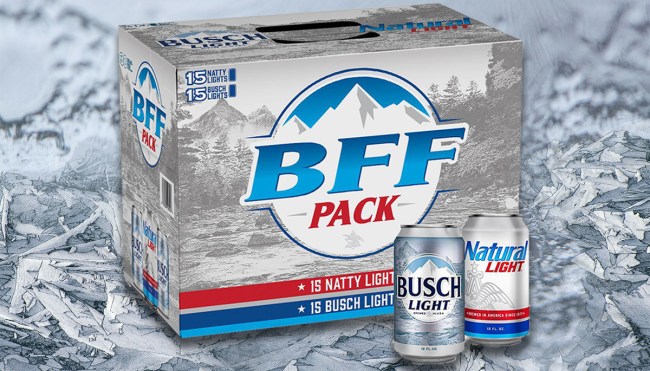 Over the past decade, I’ve tried thousands of different beers on my way to becoming a Certified Beer Nerd. However, unlike a lot of people who share my love of craft brews, I have a hard time besmirching any of the beers far too many snobs would refuse to even take a sip of.

That includes the variety of different ones I relied on during my formative years, a time when I routinely pulled out my phone to do some ABV-related calculations in the aisle of a liquor store to figure out which option would give me the biggest bang for my buck. I eventually reached a point in life where factors like “taste” and “quality” started to play a bigger role in my purchasing decisions, but I’ll always have a special place in my heart for lagers with “Light” in the name that are typically sold in large quantities.

To this day, I maintain there’s still a time and a place for the likes of Busch Light and Natty Light, two technical competitors that briefly put their differences aside on Wednesday when the former paid tribute to the latter in celebration of National Best Friends Day.

there's no one we'd rather drill beers with 🤝

That exchange came to my attention courtesy of Whiskey Riff, which almost gave me whiplash after I did a double-take thanks to an article featuring the image of a “BFF Pack” containing 15 cans of Busch Light and Natty Light nestled together in the same rack.

RT if you would drill these with your BFF 🤝 pic.twitter.com/awlYD4Oykc

The brands didn’t do much to deny the speculation that the revolutionary creation could be unleashed upon the world, and the Natty Light rep who replied to me when I pressed for more details after sliding into their DMs said they “cannot confirm or deny” if there are plans to make the vision a reality.

Based on some additional information BroBible was able to gather from a source with knowledge of the matter, it does not appear the BFF Pack is on track to be released at any point in the near future.

However, it’s worth noting both beers are owned by the same parent company, and if my time on the internet has taught me anything, it’s to never underestimate the power of people’s ability to band together and make a difference.

As a result, I encourage everyone who’s as intrigued as I am to be the change they want to see in the world.