There’s Now A Way To Buy Chick-fil-A On A Sunday For The Sacrilegious Price Of $6.66 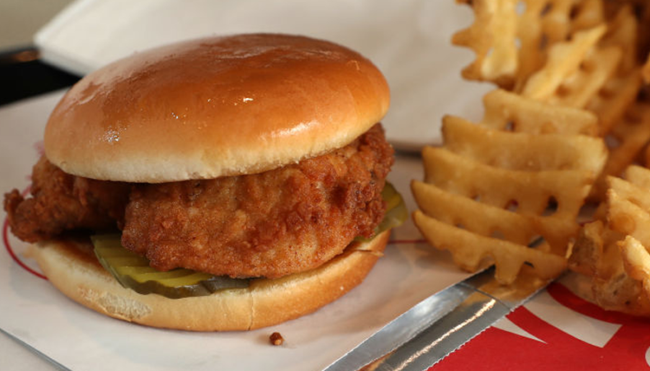 One of life’s cruelest ironies is that Chick-fil-A is easily one of God’s greatest fast food gifts (in addition to one of the trustiest hangover remedies out there) but virtually impossible to consume on on a Sunday unless you had the foresight to pick up some extra deep-fried goodness to avoid falling victim to the chain’s policy to close all of its stores on the Sabbath.

If you’ve ever headed to a Chick-fil-A location to grab a chicken sandwich on that day of rest, you likely know all too well the feeling of crushing disappointment that comes with being subjected to that development. Thankfully, a group of Good Samaritans is doing what it can to address that issue for at least one Sunday.

According to The A.V. Club, MSCHF—the Brooklyn-based art collective that previous released Nikes filled with holy water and orchestrated the controversial drop of the blood-filled “Satan Shoes” it dreamed up with Lil Nas X—has now decided to rustle some more jimmies with what has been dubbed “Sunday Service.”

On September 26th, MSCHF will be giving anyone who signs up to get a link shot their way the chance to get their Chick-fil-A fix, as the crew will be flipping a limited quantity of the restaurant’s chicken sandwiches and delivering them for $6.66 a pop.

Props to MSCHF for doing God’s (or, depending on how you look at things, Satan’s) work.