Can That Quarantine Homebrew I Just Made Make Me Sick Or Dead? 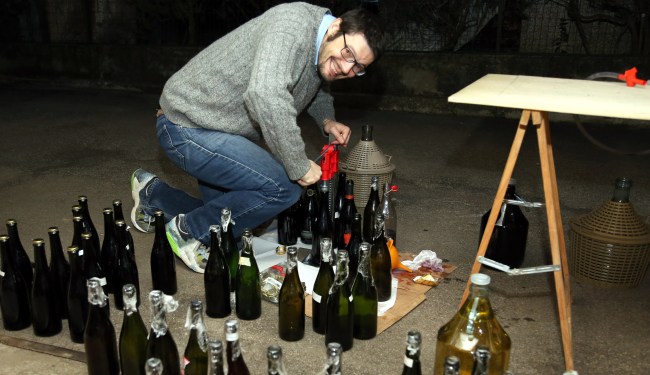 If the toilet paper hoarding citizens of the United States of America have proven one thing during this weeks-long lockdown period, it’s that there’s no way in hell’s hairy balls that the nation’s beer supply could ever be shut down without a revolt. All it took was officials in Pennsylvania to close down the liquor stores and drinkers lost their shit in a manner that forced the state to reconsider everything. For those of us watching nervously from afar, however, we recognized the potential unfolding of some political herky-jerky, so we took it upon ourselves to get self-sufficient – to become men of the land. Yep, we got used to wiping our asses with Maple leaves, started looking at squirrels as a source of protein and we learned to make our own beer. One thing was sure, if those bastards got a wild hair up their ass and decided to make package stores a thing of quarantine past, they weren’t going to catch us with our pants down.

But then, no sooner than we pitched the yeast in our first batch of a home-spun IPA, we began to hear reports about how people were dropping dead after consuming homemade beer. A news story published by Sowetan Live shows that a South African couple was found dead recently, and the killer culprit is believed to be bad homebrew. Now, wait, what? As if we didn’t have enough on our plate in 2020 with this lung-humping bug and a president who recommends drinking bleach to stay healthy, was it possible that beer drinkers were actually at risk of making themselves sick or dead if they shit the bed on an ale whipped up in the kitchen? Considering that more Americans are making their own beer these days, it’s a question we needed answers to, and like right away. So we dug further into tainted booze and this is what we found.

Depending on how homemade liquor is manufactured – was it brought to life in a nice, clean, licensed distillery or in a toilet on the D block of a West Virginia penitentiary — it can make people sick and even body slam their drunk asses on a slab down at the local morgue. No fucking around, poorly made booze is the devil, and people have been getting snuffed out by it increasingly over the past few years.

In some parts, it’s called “counterfeit” alcohol. Criminal organizations are in the business of manufacturing booze using shortcuts and cheap ingredients – sometimes they simply mix water and methanol – to be stocked in bars and taverns in foreign lands. But methanol is some ugly shit and should be avoided at all cost. It is found in harsh industrial solvents and pesticides, so to say it is insanely dangerous to humans, well, that would be an understatement. Just the smallest amount can lead to alcohol poisoning, liver failure and permanent blindness. Oh yeah, and it doesn’t take much to kill a person either. Hundreds of people die each year from drinking this crap.

Thankfully, methanol poisonings are not very common in the United States. We’re regulated over here to beat the band. That means most of the drinking establishments we frequent on a regular basis aren’t getting their booze supply from some toothless, cut-rate moonshiner from the hills of Appalachia. But if you’re traveling abroad, you best watch your ass. While a methanol buzz might start out like any other, it can get gnarly pretty quick, according to the World Health Organization. Methanol toxicity might start out with drowsiness and breathing problems and the next thing you know you’re asking Saint Peter if he’s got anything for a hangover.

The process of making beer, however, is an entirely different deal. It’s much safer. Even the most unskilled homebrewer probably isn’t going to screw the pooch bad enough to produce a brew toxic enough to get someone sick or put them six feet in the ground.

Basic fermentation (when yeast devours sugar and craps out alcohol) brings to life ethanol and not its dangerous counterpart methanol. Furthermore, the American Homebrewers’ Association says no pathogens can survive in beer because of the alcohol content and pH level. So, even the most fouled-up, god-awful batch of homemade beer isn’t going to cause so much as even a mild case of food poisoning, much less make a person violently ill or kill them dead. There’s simply nothing harmful to humans that can flourish in that environment. So relax if you have been feeling a bit skeptical (or hell, even scared) about your first attempt at brewing. Rest assured, the worst that can happen is the beer will taste bad and maybe give you a savage hangover.

So then, what happened to that South African couple? Well, the jury is still out on whether the homebrew was really the cause of death. The report indicates the beer was seized for forensic tests. It’s likely, however, that the couple died from methanol poisoning. This toxin can happen in beer, but only if it is made with the wrong ingredients. While grains can produce extremely low-levels of methanol, certain fruits and vegetables generate frightening amounts. So, unless you know what you’re doing, it’s best to stick with a homebrewing kit, like the ones we listed here. Not only are they easy, but they come packaged with the necessary grains and hops to keep you from having to forage out in the wild for questionable ingredients. It’s a great way to learn the craft.

The most crucial trick to homebrewing is keeping everything clean throughout the process. Anything that is going to touch the beer needs to be rinsed in sanitizer. This will ensure the concoction doesn’t get contaminated by bacteria. But if some pesky intruder does infect your creation, it’s going to be more of a disappointment than a health issue. After all, if bad beer was going to take us out, those of us who spent our 20s sucking down Natural Ice Light would have been dead long ago.