Can Playing Dead Really Help You Escape An Animal Attack? 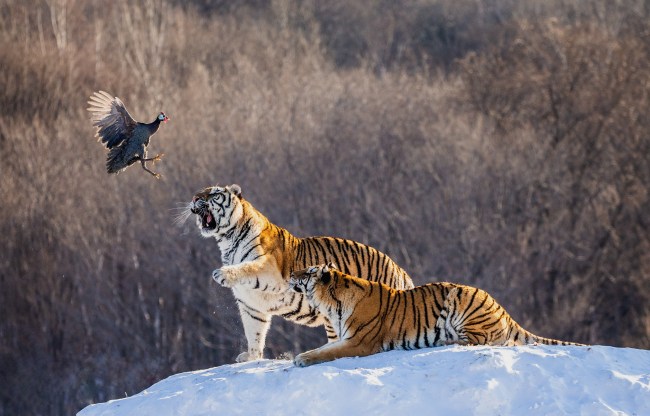 “Lions and Tigers and Bears, Oh My!” — Someone who got mauled to death, probably

Anyone who has ever set out to explore the wilderness has probably uttered the words, “Man, let’s hope there aren’t any wild cats or anything out here.” But even though most of us are aware that it’s always a possibility we could come face to face with a bloodthirsty beast, we continue deeper into the wood like a bunch of idiots. Because what are the chances of actually encountering a wild animal large enough to gnaw off our arms and get us a spot on the evening news?

And even if we do, we’ve always heard that they are more afraid of us than we are of them. Most people believe that critters can hear them coming from miles away and will scatter long before they ever cross paths. We are, after all, the top of the food chain. Nature doesn’t want any of this!

Only that’s not always the case.

Animals can get pretty hangry out there in BFE, so the dinner bell starts ringing when they spot some dumb human all decked out in Eddie Bauer, trying to summon his survival instincts one Google question at a time. These creatures could also get confrontational if they feel their progeny is threatened. Hell, they might just want to get into a pissing match over territory. They’re called wild animals for a reason. They are unpredictable at best, and a lot of them are stronger and faster than us. Any situation where it is man versus predatory beast, let’s just say that man probably isn’t going to do so hot. It’s the reason we hunt with guns and not our bare hands.

We don’t want to lose.

There have been countless tales that have surfaced throughout the years, suggesting that people have survived vicious animal attacks by playing dead. It’s not such a far-fetched survival tactic, either. After all, various animals use this defense mechanism to get their predators to back off. If you’ve ever heard the phrase “Playing Possum,” that’s because these weird marsupials are perhaps the best at faking death. They can reduce their breathing and heart rate enough to con a predator into thinking that they’ve gone off to the great possum kingdom in the sky. They also secrete a gnarly butt fluid that mimics the stench of death. Come on, how cool is that?

Some birds and bugs also play dead when they feel threatened. But is it effective in running off those things trying to kill them? According to scientists with the University of Bristol, it is if they have more patience than their predators. Researchers say that lying entirely still for “unpredictable periods” is the key to some species’ survival. It makes it impossible for a predator to gauge how long their prospective meal might remain immobile. Not wanting to wait around all night to eat something, the predator moves on, setting their sights on more active prey.

“Our work shows a new way forwards for studies of predator evasion: namely, the importance of quantitative and analytical approaches focusing on how behavioral acts can be strategically timed,” said lead researcher Professor Nigel Franks.

But when it comes to humans, playing dead is a bit of a crapshoot – even if a person can lie still with unpredictability while waiting for a predator to vamoose. In fact, this defense should never be a person’s go-to.

For example, wildlife experts say the old play dead routine might work on a bear, but then again, maybe not. It really all depends on whether the animal is hungry or just protecting its young.

But how do you know whether a bear is hungry or if it’s just upset that you’re standing too close to the cradle? That’s easy. When a bear stalks a person for food, they are typically sneaky about it. A person who is about to become a grizzly’s lunch probably won’t know it until it’s too late.

A bear that’s in defense mode, however, will swell up to show a threat that it’s coming for that ass if they make one wrong move.

Instead of playing dead, go into combat mode.

“Fight for your life,” says GBSS. “Kick, punch, hit the bear with rocks or sticks or any improvised weapon you can find.”

It is essential to point out that bear attacks are sporadic in the United States. There’s only around 10 or 11 of them every year. Still, some unlucky schlub is getting mauled by one of these animals nearly once a month. It goes without saying, you don’t want to be one of these guys.

Furthermore, don’t even consider playing dead if you happen to be confronted by a mountain lion, the experts advise. These animals don’t give a flipping damn about you being in their territory, all they are interested in is that “All You Can Eat Buffet” sign hanging above your head.

“You don’t want to play dead as you might with a grizzly bear,” explains Texas wildlife biologist Raymond Skiles. “Because these animals are predators that have decided to see you as food. “You need to stand your ground. You need to run it off. You need to use the instruments at your disposal.”

Wild animals are easily intimidated. Therefore, hiking in a group (or even two people) is the best bet for anyone worried about being attacked. Nevertheless, if one comes out of the bushes looking for trouble, you’ve got to show the beast who’s got the bigger pecker. No, not literally. You might get it bitten off. But try to get as big as possible and summon the kind of crazy that your ex-girlfriend showed after she caught you cheating. No wild animal alive would dare fuck with that.