Carole Baskin Is Offering A Measly $5,000 For Anyone Who Confronts An Alleged Murderer And Helps Save A Full-Grown Tiger 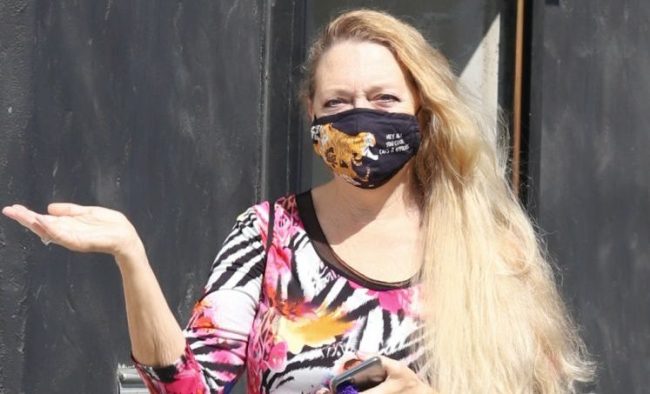 Carole Baskin, of “Tiger King” fame, is offering the worst reward ever. She will give $5,000 to the person responsible for returning the tiger that has been missing in Houston since Sunday. The tiger must be returned to a sanctuary that is accredited by the Global Federation of Sanctuaries. She posted the reward on Instagram.

Look, the idea here may be well-intentioned, but Baskin is out of her mind. Let’s take a look:

What tiger is she talking about?

A full-grown tiger got loose in the Houston area over the weekend and crazy videos began to surface from the neighborhood on Sunday night. The animal did not get loose from an exotic zoo (like Tiger King), but was literally being kept as a pet and wandered out a door. It was wandering around the street and posting up in front lawns.

So this happened a short while ago. Yeah, literal Tiger my neighborhood. Right after they brought it back inside they loaded it into an SUV and barreled out of their driveway over the lawn and fled from the police. pic.twitter.com/0bzYML3vTu

If tiger going out for a stroll wasn’t wild enough, the owner fled when the police came to the scene.

Who is the owner?

We don’t know exactly. The person who was watching the tiger when it got loose in Houston was Victor Hugo Cuevas. He was out of jail on bond for an unrelated murder charge. No big deal.

His legal council said that he has been an occasional “babysitter” for the tiger, and said they “have a bond.” Cuevas was set to appear in court on Friday.

“At the end of all of this, we hope to show that Victor Cuevas is not guilty of evading arrest,” Cuevas’ attorney Michael Elliott said.

Elliott said that his client loves the Tiger. He added that Cuevas “really wants to get the tiger to a nice, safe home.”

The two remain adamant that Cuevas does not own the tiger, whom has been identified as a 9-month-old male named “India.”

Again, we don’t know. Elliot has stressed that he and Cuevas are working to locate the animal. Exotic animal traffickers may passed the endangered cat as many as a dozen times to conceal its whereabouts.

Elliott appeared on CNN on Friday morning and said that he and his client are cooperating with federal authorities in the search. However, he mentioned that they are not cooperating with Houston police because, “you can’t trust them.” In addition, Cuevas and Elliott remain silent on where he took the tiger after fleeing police.

Fortunately, Houston police don’t believe it is loose and roaming around. Unfortunately, they don’t have a clue as to India’s location.

All of this goes to say that Carole Baskin is simply absurd with her reward. Neither Houston nor federal authorities know where it is. That means there is a zero percent chance that an average Joe knows anything.

To make it even less enticing, the reward also requires that the person provides enough information to police to convict the tiger’s buyer and seller.

Thus, her reward is being offered directly to the traffickers. She is offering measly $5,000 to rat out a long-standing exotic animal trafficking operation. That operation is likely full of people who are alleged killers like Cuevas— so essentially $5,000 for a chance to die.