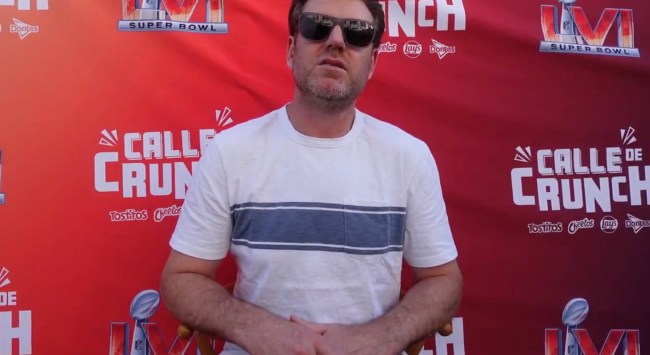 A football legend was born on New Year’s Day 2019. In the first quarter of the Fiesta Bowl against UCF, Joe Burrow had the wind knocked out of him. That dirty hit, televised to a massive stage, ignited a fire and fury within the former LSU quarterback.

It’s safe to say that hit gave Burrow, who would go on to be the #1 pick in the 2020 NFL Draft, some kind of football superpowers.

The Tigers went on to win the Fiesta Bowl 40-32, resulting in an infamous cigar picture that was replicated when the Cincinnati Bengals clinched the AFC Championship with Burrow at the helm.

“He’s unbelievable. They have one of the weaker offensive lines in the league, he’s been sacked the most in the league this year. So you know he’s tough. You know he’s smart the way he’s played,” former Bengal’s quarterback, Carson Palmer, said in an interview at the Frito-Lay’s Calle de Crunch Super Bowl experience in Los Angeles.

“But the thing that stands out the most is how calm he is. He’s always so poised, regardless of if he’s getting sacked nine times by the Tennessee Titans on the road. Or if he’s up 21 points. He’s just the same guy consistently.”

Earlier in the day, Palmer told Bengals.com senior writer Geoff Hobson it’s “demoralizing” to be in Burrow’s shoes with all those sacks.

Any advice to Joe Burrow?

“Don’t change,” the retired 15-season NFL quarterback adds. “Be exactly who you’ve been all year long. He’s been consistent, he’s been such a solid player. He’s been a rock and a leader for a young team. He’s one of the younger guys on the team.”

“Don’t change. Just be himself and those guys will follow him. That’s their best chance at winning this game.”