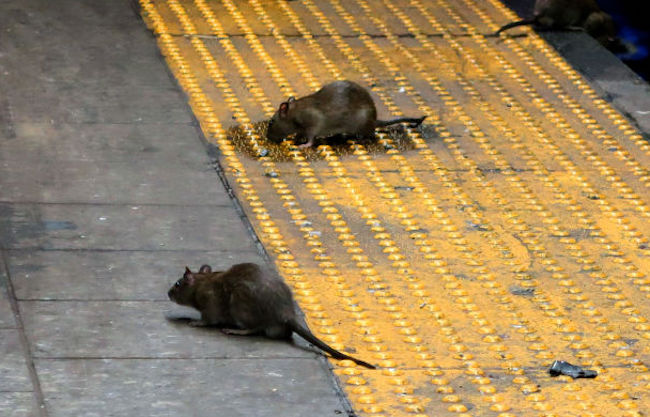 In 2008, T.J. Miller made his acting debut as the guy holding the camera in Cloverfield who documents a night filled with the many bad experiences that come with a giant monster capable of deploying tinier monsters laying waste to New York City.

While nearly getting crushed to death by the Statue of LIberty’s head, watching your friend explode, and having the helicopter that was whisking you to freedom crash in the middle of Central Park are all particularly unenjoyable experiences, none of them were as horrifying as what unfolded in a subway tunnel when hordes of rats suddenly started scurrying by the film’s main characters as the rodents fled from an unknown enemy the horrified humans would become acquainted with shortly after.

Basically every major metropolitan area has a rat problem to some degree, and after moving to New York City, it didn’t take long to discover the five boroughs are no exception. The world may have fallen in love with Pizza Rat back in 2015, and while I see the appeal, I assume people who found it adorable have never had a rodent the size of one of Shaq’s sneakers jump out from a pile of trash and dart across your shoe while walking home at midnight.

A couple of years ago, the city revealed a plan to put a 70% dent in a rat population that’s believed to be around two million through various extermination and preventative measures, with a special emphasis placed on the dining establishments that provide a solid chunk of the sustenance these furry hellspawn require.

As a result, there’s a theoretical silver lining to the situation that has resulted in bars and restaurants being forced to essentially close their doors over the past couple of months, as you’d think being cut off from a long-relied source of food would result in a drop in overall numbers as starvation does its thing.

It remains to be seen if this will be the case when everything is said and done, but in recent weeks, rats have instead decided to literally wander out of their comfort zone in search of food.

What if they can’t find any? Well, they’ve begun to resort to another strategy: cannibalism.

As a result, the Center For Disease Control was forced to issue a warning last week and provide advice on how to deal with increasingly aggressive rats who have begun to develop a taste for their own kind, urging people to seal possible points of entry into homes and businesses and take care to properly seal garbage cans and secure other sources of food.

There is currently no reason to believe armies of rats (presumably under the watch of Crispin Glover) will begin to patrol the streets in search of any flesh they can gnaw their teeth on, but when you consider everything else currently going on, rats are something I’d really prefer to not have to stress about right now.