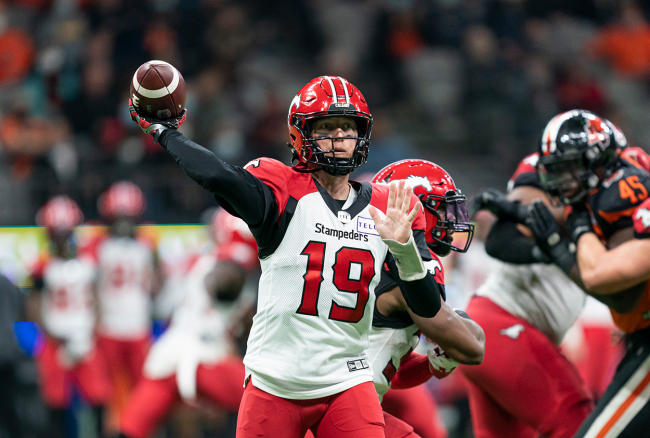 Friday night lights was in full effect in Winnipeg last night as the Blue Bombers hosted the Calgary Stampeders for an epic Week 5 thriller. Both teams entered the game undefeated and the winner would sit atop the Canadian Football League standings.

The Blue Bombers ended up being victorious, but they almost didn’t. The play that sealed the game for the home team was complete and utter mayhem.

With less than a minute remaining, the Stamps had the ball at the Winnipeg 29-yard-line with a full set of downs, down by seven. After sending his receivers into motion — something that is unique to the CFL — quarterback Bo Levi Mitchell snapped the ball and looked to his left.

He saw his receiver in a one-on-one battle with the defensive back and decided to give him a shot. Mitchell aired it out and dropped an absolute dime right into the out-stretched arms of former Bowling Green pass-catcher Kamar Jorden.

Jorden appeared to lay out and make a fantastic catch that would put his team an extra point away from tying the game. But he didn’t.

As Jorden went to the turf, he coughed up the ball and sent it flying into the air. Meanwhile, the Blue Bombers cornerback who got beat trailed closely behind and ended up hauling in the loose ball before it hit the turf for a game-sealing interception.

Winnipeg won the game by seven and sits 6-0 on the year.