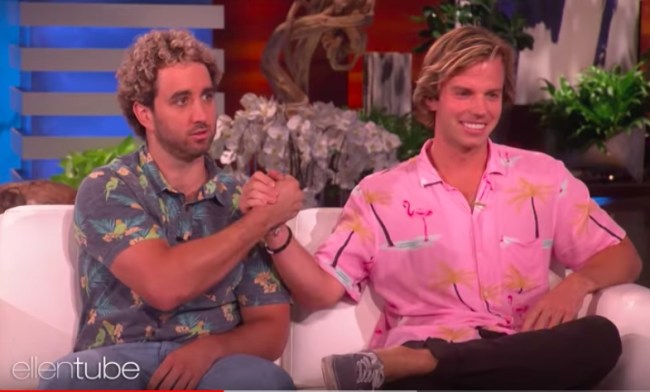 Well, the bros from Chad Goes Deep have been wallowing in town hall meetings from California to Delaware with no food, no jobs, and their pets heads falling off. Thankfully, they’ve been fueled by one thing that transcends material value: the unwavering desire to make the world a chiller place.

Whether it be fighting for a bro’s right to party or appearing on Fox to courageously combat the cultural stigma of Nickelback, Chad and JT have been thanklessly and tirelessly working to live a life Paul Walker would be proud of.

Just weeks after the Chad Goes Deep guys linked up with BroBible and Sailor Jerry’s to deliver a transcendent night of comedy for our service men and women, the activists appeared on Ellen (yes, THAT Ellen) to lobby for a cause that is on everyone’s mind, but no one had yet mustered the courage to voice: scooter-riding as an Olympic sport.

Hella brave of them.

“Stoked off civic duty” is a t-shirt I would wear to my wedding.

Whatta time to be alive.