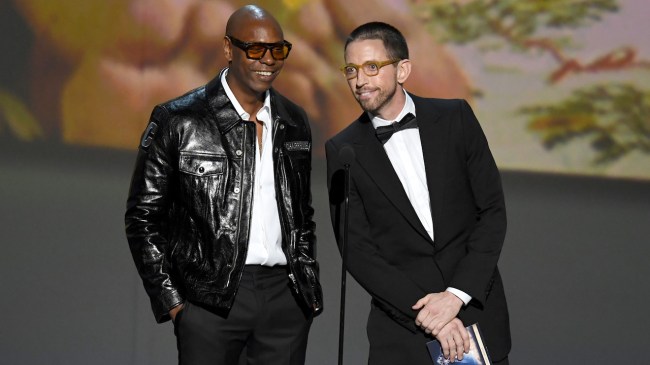 If you’re around the same age as me — meaning you were born anytime between like 1986 and 1996 — then Chappelle’s Show has a certain aura of legendary myth around it.

Gone as soon as it came, Chappelle’s Show was such an omnipotent presence in popular culture during the early 2000s that you couldn’t go a week without hearing someone say “I’m Rick James bitch!”

But, as the tale of Chappelle’s Show goes, just as it was reaching its critical mass, the comedic mind behind the whole shebang decided he had enough. While that’s another story for another day, the point is that because of its abrupt end at the height of his powers, the series has been mythologized in the years since, especially due to Chappelle’s subsequent disappearance from the public spotlight.

And according to series co-creator Neal Brennan, Chappelle’s Show may actually be more fabled than we already realize, as he revealed that many of the show’s most iconic lines were improvised by Dave on the spot.

Speaking at the Mark Twain Prize ceremony honoring Dave Chappelle at the Kennedy Center, Brennan claimed that a handful of the show’s most famed moments — including Clayton Bigsby’s “entire speech” — were made up by Chappelle in the heat of the moment.

When we started the show, I knew Dave was the funniest person I’d ever met. By the end of the show, I knew Dave was one of the funniest people who’d ever lived. I think he even surprised himself with how funny he was. There were times where he would just improvise something that we had never talked about before, that he’d maybe never even thought about before. Clayton Bigsby’s entire speech about breathing the white man’s air, and Will & Grace, and if you have hate in your heart, let it out, white power: all made up. I have to say, saying “white power” in this room didn’t sit right with me.

Tyrone Biggums’s speech to the kids about doing drugs with Mickey Mouse: totally made up. And that’s just the first two episodes of the show. So much of it was just completely off the top of his head. Rick James saying “It’s a celebration” and “Fuck yo couch” and five fingers hitting the face. Black George Bush telling Kofi Annan that he should be in Times Square selling fake hats. Dylan, Dylan, Dylan, Dylan. He made it all up.

Writing and directing Dave sometimes was as simple as me standing onstage with my jaw hanging open, going, “Uh, cut?” [via Vulture]

If you want to see the entire excerpt from Brennan’s speech, head over to Vulture. As for when you can see the speech, the Mark Twain Prize ceremony airs on PBS on Monday, January 6. It will definitely be worth tuning in, because, in addition to Brennan, Kenan Thompson, Bradley Cooper, and Jon Stewart also paid homage to the beloved comedian.