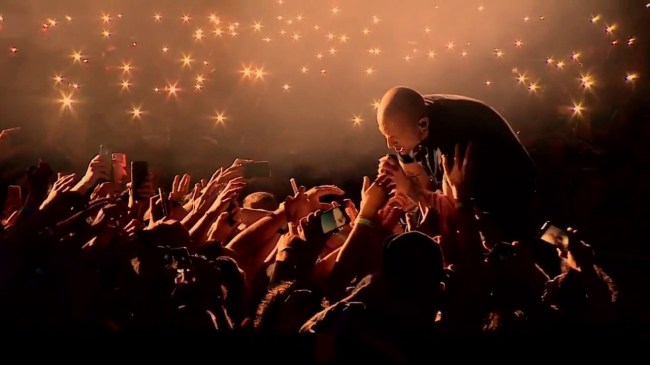 TMZ is reporting the results of Chester Bennington‘s autopsy and toxicology reports. The reports say that the Linkin Park lead singer had alcohol and ecstasy in his system at the time of this death.

Bennington was said to have a small amount of alcohol and MDMA (ecstasy) at the time of his death on July 20, 2017, after committing suicide. Authorities found a prescription bottle of Zolpidem, which is a generic Ambien that treats insomnia, on his dresser. There was also a pint glass of Corona, which was less than half full, as well as an empty beer bottle of Stella Artois.

The 41-year-old singer hung himself with a black Hugo Boss leather belt. Dr. Christopher Rogers, deputy medical examiner at the Los Angeles Coroner’s Office, wrote in the report that “autopsy findings are characteristic of suicidal hanging. There was a history of suicidal ideation.” There was no suicide note, but police found what they call a handwritten “apparent biography.”

Bennington had been outspoken about his bouts with depression, drugs, and alcohol. In 2006, Chester stormed out of his house with a gun after drinking heavily and had gone to rehab twice around the same time. Chester’s wife Talinda told police that he had been prescribed anti-depressants in the past, but had not taken them for more than a year. She also told authorities that he was in an outpatient treatment program at the time of his death. About a month before his death, Chester allegedly told his friends that he had been sober for 6 months.

If you or anyone you know are feeling in distress, call the National Suicide Prevention Lifeline at 1-800-273-8255 or visit their website.