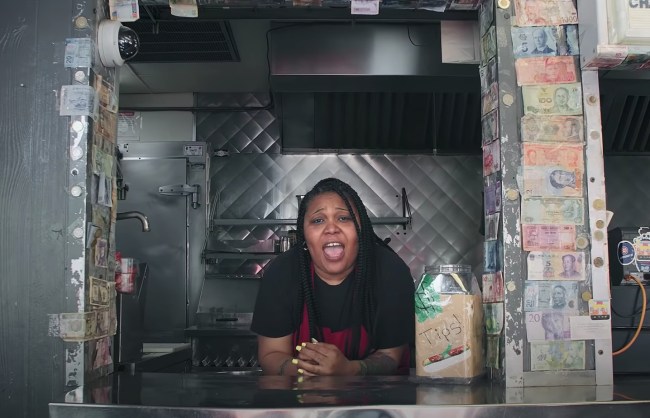 Every single time we flip on the TV there’s some brand telling us ‘in these uncertain times’ they are here for us. It’s almost as if every single large corporation on the planet hired the same firms to produce the same steaming hot piles of guano because each of these atrocious commercials sounds and looks identical.

Chicago’s Wiener Circle decided to do one of their own and what they released is easily the most profane commercial I’ve ever seen. I legit think I learned new ways to use profanity in the 74 glorious seconds it took me to watch this clip.

If you’re not familiar with Chicago’s Weiner Circle, it’s a hot dog stand in Chicago’s Lincoln Park that’s equally as famous for their Char-dogs, hamburgers, and cheese fries as they are famous for the verbal abuse spewed from the workers who roast customers and each other. Being jerks is their thing and they’ve bottle that magic for this clip.

After you enjoy this be sure to watch the old clip of Jack McBrayer and Triumph visiting the profane hot dog stand below. Just as an FYI, if you’re bothered by profanity or easily offended then this is not for you. For anyone else, enjoy this amazing commercial from Chicago’s Wiener Circle:

Absolute perfection. The world needs more of this and less of massive brands telling us they’re here for us. And if you’re wondering about that milkshake reference, it’s not uncommon for the workers to pull up their tops and flash customers when they order a milkshake.

The world needs more of this. A business employee and a rubber dog, standing face to face, roasting the absolute life out of each other with neither willing to give in.