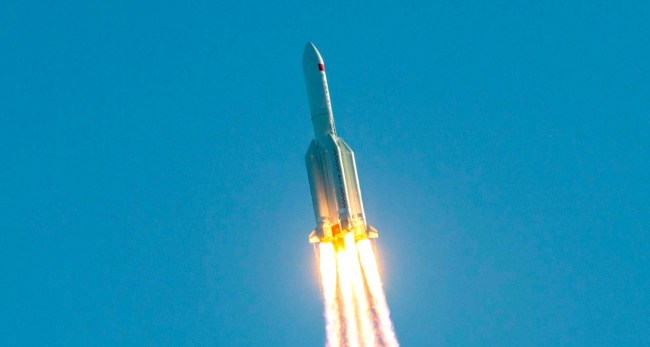 Here’s something that was bound to happen sooner or later. A 37,000 pound Chinese Long March 5B rocket hurtled itself towards Earth uncontrolled a speeds reaching thousands of miles per hour.

I say it was bound to happen, and probably will happen many more times in the near future, because there is so much junk floating around Earth we may not even be able to travel into space in the future.

According to the European Space Agency (ESA), there are over 750,000 pieces of space debris currently orbiting Earth.

The over 5,000 rockets that have been launched into space since 1942 plus all the satellites, fuel tanks, boosters, and other cargo that have been left behind end up colliding with one another spreading the space debris all over the place.

That’s not what happened in this case, but it is just one more hazard we have been creating for ourselves which all of the things we continue to launch into space.

According to Eric Mack of Forbes, the Chinese rocket is the largest piece of space junk to fall uncontrolled towards Earth in decades.

The rocket body was more massive than the Chinese Tiangong-1 space station that plummeted back to Earth (presumably landing somewhere in the ocean) in 2018. It’s about a fifth the mass of Skylab, which came back to Earth near Perth, Australia in 1979.

Most of the rocket was expected to burn up, but small pieces could have made it to the surface.

Rocket re-entries are notoriously difficult to predict, as the object is moving at thousands of miles per hour. When it breaks up, debris that makes it to the ground can be spread over hundreds or thousands of miles.

“It is the most massive object to make an uncontrolled reentry since the 39-tonne Salyut-7 in 1991,” wrote astrophysicist Jonathan McDowell of the Harvard-Smithsonian Center for Astrophysics, who tracked the rocket as it made its uncontrolled re-entry.

And a new prediction: between 1443 and 1555 UTC. Finally we can narrow down potential reentry areas in Australia, US, Africa pic.twitter.com/0dxRX02QfP

The CZ-5B should cross the Australian coast in 10 minutes or so, over Salt Creek SE of Adelaide..
Local midnight, and low enough now that reentry heating may make it visible

Next landfall, if it doesn't reenter by then, about 8:10 am Pacific over Mailbu – predicted to pass right over Hollywood and JPL!

CZ-5B will pass over Colorado Springs at about 9.15am Mountain Time.

If CZ-5B is still in orbit, its next landfall is over Nouakchott (Mauritania) at 1535 UTC.

CZ-5B core stage reentry confirmed down at 1533 UTC, off the west coast of Africa https://t.co/hzePzF0THc

The U.S. military stated that it believes whatever pieces of the rocket survived re-entering the Earth’s atmosphere likely landed in the Atlantic Ocean off the coast of West Africa.

The spent rocket, which was labeled CZ-5B by the agencies tracking it, orbited within about 41 degrees north and south attitude.

That means any bits that made it to the surface landed somewhere in that range, which includes New York in the north, Australia in the south and everything in between.

The updated information from the military makes it likely most of the rocket burned up or wound up in the ocean.

Bet folks who live in Malibu, Colorado Springs, and New York City had no idea an out of control 37,000 pound Chinese rocket sailed over their heads at thousands of miles per hour on Monday, huh?