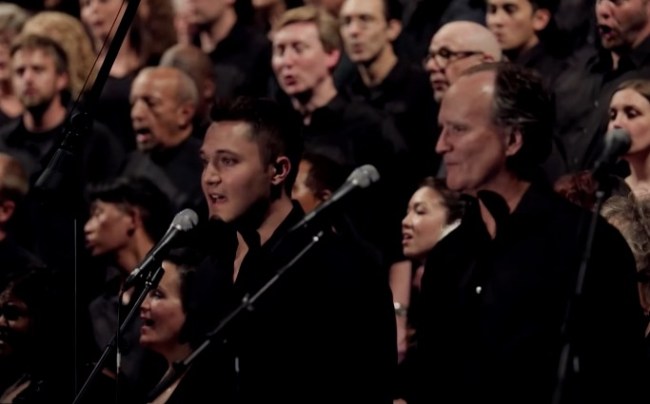 Toto’s ‘Africa’ doesn’t make this list of the 10 most covered songs in the world but you wouldn’t know that from all the attention this song has received over the past year or so.

Weezer currently has a cover version of Toto‘s ‘Africa‘ that’s getting non-stop radio playtime in New York and Los Angeles which means it’ll soon get played to death by every other radio station in America. That cover is #77 on the Billboard ‘Hot 100’ right now but it’s got nothing on this choral cover of ‘Africa’ from a few years back.

This clip below is actually from 2013 but just went viral last weekend for some reason. It probably helped that someone posted it to Reddit which caused a massive spike in the views. But this video is absolutely incredible and has to be seen to be believed.

So what’s the story here? Basically, you’ve got this chorus simulating a thunderstorm using nothing but their hands, bodies, and voices before busting into one of the most interesting cover songs you’ll ever hear. Seriously, don’t skip ahead straight to the part where they’re singing ‘Africa’ by Toto because the thunderstorm noises are one of the most trippy things I’ve ever heard.

I can’t honestly say that I’ve seen too many chorus performances in my life. Maybe two at most. But if it involved covering 80s Pop Music songs I think I could get on board with supporting the arts.

I’m sure many of you have heard it by now, but if you haven’t heard Weezer’s cover of ‘Africa’ by Toto then you can check it out below where they’ve released a music video for the film starring the one and only Weird Al Yankovic.

We’re probably days away from Nine Inch Nails and Marilyn Manson teaming up to cover Toto’s ‘Africa’ so they too can get a piece of the Billboard charts and relive some of that nostalgia glory that everyone else seems to be cashing in on right now. (h/t r/videos)