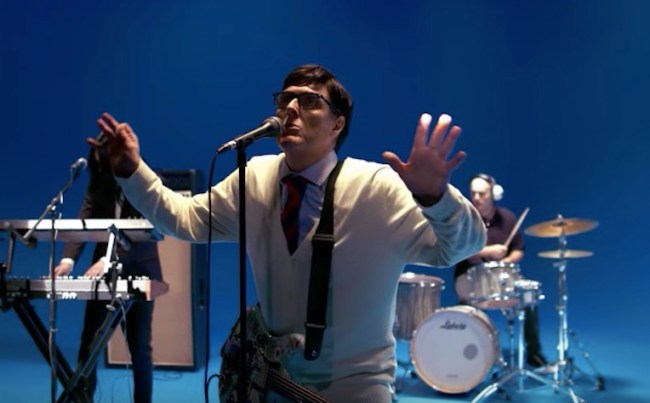 It’s starting to seem like the music of Weezer and Toto will be inextricably linked after this bizarre ‘Africa’ saga plays out. The latest chapter was just released on Weezer‘s YouTube channel where they’ve uploaded a music video starring Weird Al Yankovic as the frontman lip syncing Toto’s ‘Africa’.

The music video starring Weird Al Yankovic and his fellow bandmates is meant to be a parody on Weezer’s 2004 ‘Undone – The Sweater Song‘ which has racked up nearly 25 million views on YouTube.

The two music videos are shot in a nearly identical fashion with a camera rotation throughout the room while the band performs the song. Only in this instance, it’s Weird Al lip syncing in place of Weezer’s Rivers Cuomo as the frontman.

If you haven’t been following this story let me clue you in on what’s been happening. This Weezer-Toto-Africa stuff all started when one devoted Weezer fan created the Twitter handle @weezerafrica in an attempt to get the band to cover Toto’s ‘Africa’. For months, that fan would endlessly tweet at the band in hopes of getting them to cover the song.

The first sign that the band was listening came when Weezer trolled the fan by performing a cover of Toto‘s ‘Rosanna’ which ignited Internet-wide interest in getting the band to cover ‘Africa’. Shortly after that, Weezer busted out a super legit cover of Toto’s ‘Africa’ on Jimmy Kimmel Live‘s Summer Stage and fans went nuts for it.

It seemed like this bizarre Toto-Weezer relationship had reached its conclusion when a few weeks ago there was a role reversal and Toto covered Weezer’s ‘Hash Pipe’ at a concert in Vancouver. Today, the saga continues and Weezer’s dropped this music video starring Weird Al lip syncing and they’ve got me listening to this on repeat.

The song’s great. The cover’s awesome. And Weird Al starring in this music video while wearing a Rivers Cuomo disguise is just the icing on the cake.

Can you dig it?

Will you be listening to this cover on repeat for the next month like I will?

Is this the final chapter in the Weezer-Toto saga?

Get loud down in the comments.