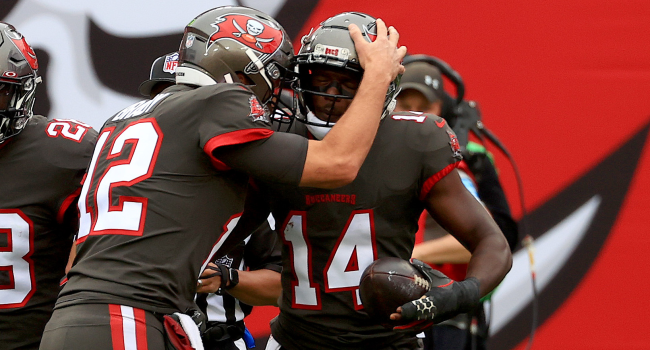 One of the minor stories to occur when Tom Brady decided he was going to take his talent to Tampa Bay and play for the Buccaneers last year was what was wide receiver Chris Godwin going to want in exchange for turning over his number 12 jersey to the GOAT.

Turns out, Godwin didn’t get anything for the number he said he had been wearing since high school. He just handed the number over to Brady “out of respect.”

Godwin later added, “hopefully I can get a ring or two or three out of” giving up the number.

As we all know now, that certainly didn’t take very long as Godwin only had to wait one season for a Super Bowl ring. (Even if he did lose his phone in the process.)

This week, Chris Godwin is filling in for a vacationing Peter King and is serving as a guest writer for King’s Football Morning in America column.

Godwin, a third-round pick out of Penn State in 2017, did a nice job with his piece, but perhaps the most fascinating part of his article was when he discussed the DM Tom Brady sent him when the QB signed with the Bucs.

After discussing his path to the NFL, playing in the Newcastle County Little League on a team called the Bucs, moving up to Middletown High School, heading to State College, and then getting the call on draft day from Tampa Bay (“No way. The Bucs! It’s coming full circle!”), Godwin wrote about his magical 2020 season.

“When free agency started, COVID started in the country that same week, basically. No one knew exactly how it was going to impact sports, let alone life. Then on top of that, we didn’t bring back Jameis, so who was gonna be our quarterback?

“At a time like this, players are just like you. We didn’t know who we’d get. We heard chirping about Tom Brady, Philip Rivers, Teddy Bridgewater. Then I saw on ESPN it was down to Tampa and the Chargers for Tom. And I was like, well, it’s gonna be weird seeing Tom in a Chargers jersey, after seeing him with the Patriots for so long. He’s from California. Maybe he wanted to go home. I mean, both teams have a good set of skill players. They have Keenan Allen and Mike Williams and they had Hunter Henry. They had some good players. I thought there was no shot he’d come to Tampa. What would really draw him here?

“Then I saw we’re agreeing to terms with Tom. I got a notification on my phone. Still I didn’t believe it. I went on Instagram to see if there was any other news on it. I saw a direct message notification. It said it was from ‘Tom Brady.’

“It was the real Tom.

“Let me pull it up on my phone. March 17. He said he was excited to play with me, he’s watched me a lot over the years. He even threw a college joke in there: ‘I won’t hold it against you that you’re a Penn State guy.’

“Then he said congrats on your engagement.

“I had just gotten engaged. And the greatest player of all time is DM-ing me wishing me good luck with my engagement and saying he’s excited to play with me! That was just shocking to me. I get drafted by Tampa, never thinking I’d ever have a chance to play with Tom Brady, and now, in the prime of my career, he’s gonna be my quarterback.”

And just think, the Buccaneers are returning in 2021 with all 22 starters from Super Bowl LV, including Chris Godwin and Tom Brady, back when the season kicks off this fall. Scary.