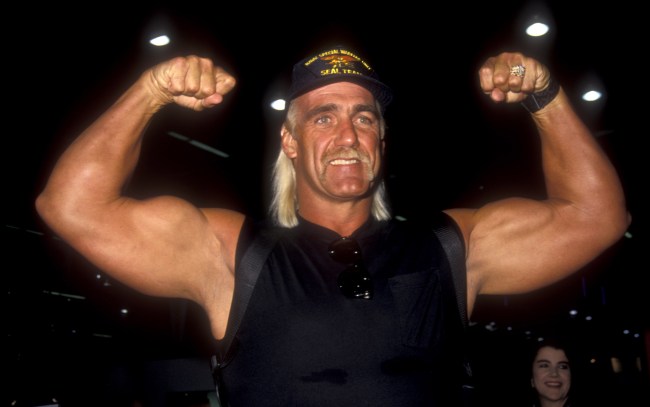 If you had told me a week ago that Chris Hemsworth would be playing Terry ‘Hulk Hogan’ Bollea in a biopic from Bradley Cooper and they guy who brought us The Hangover, Old School and Road Trip, I’d say ‘Piss off, brother!’ I would have pegged Nick Nolte as a shoe-in for the role and I’m currently concerned that Thor doesn’t have enough crazy in him.

Deals for the biopic are in the midst of closing with Netflix, and they are putting some top brass in the producing role. Michael Sugar, the Academy Award winner behind Spotlight, who will produce the film via Sugar23, with Cooper and Todd Phillips producing via Joint Effort.

Not everyone in the wrestling world is excited for its release. Semi-retired pro wrestler and radio host Bryan Alvarez doesn’t think Hemsworth has the girth to play the most famous wrestler in WWE history, believing the actor to be ‘regular size.’

‘He’s big, and yes he’s got long blonde hair, but…have you seen Hulk Hogan in the ’80s? He’s at least twice the size of Thor,’ he said.

Alvarez then questioned Hemworth’s ability to transform into Hulk because he’s Australian.

I spent a good long while this morning scrolling through Twitter to gobble up the reactions to the news, and some of these brought me great joy.

casting chris hemsworth as a young hulk hogan in that biopic is the nicest thing anyone has ever done for hulk hogan pic.twitter.com/ku6YnjOvll

If this Chris Hemsworth Hulk Hogan movie doesn't end with Hemsworth sitting in court testifying about the length of his penis, they're doing it wrong.

chris hemsworth will be playing hulk hogan in a biopic for netflix. did you see this? yeah, they say chris hemsworth is preparing by eating sushi. folks,

Chris Hemsworth's Agent: You wanna do the Hulk Hogan movie?
Chris: Eh, he's kind of a shmuck
Agent: We've been over this, you're only good at playing jacked guys with long blonde hair
Chris: I knoww but—
Agent: Look, we're running out of options
Chris:
Agent:
Chris: Okay fine

Wait Chris Hemsworth is playing young Hulk Hogan while Wyatt Russel is out there? pic.twitter.com/qthHAgFi6p

What do you guys think? Who would you like to play Macho Man? Ms. Elizabeth? Vince McMahon?