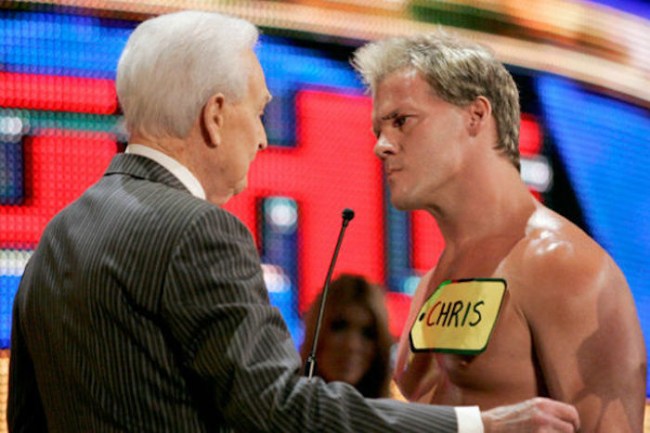 Chris Jericho has reinvented himself a hundred times in his wrestling career. His recent work with AEW is some of the best of his career but every single Jericho reincarnation is memorable for different reasons.

In late 2009, Jericho portrayed an asshole heel who didn’t talk much, a real departure from his early work where he’d rip opponents apart on promos.

During this period, “WWE Raw” would have a different guest host each week. A few of the celebrity guest hosts during that time include Seth Green, ZZ Top, Jeremy Piven, and Shaq.

On the September 7th, 2009 episode, WWE invited “Price Is Right” host Bob Barker to be the special guest host.

“Bob Barker is one of those guys that I — when he showed up in Chicago, because we were doing the guest host thing at the time. I thought he was going to get eaten alive by the Chicago crowd,” admitted Jericho on a recent episode of Jericho’s Facebook Live show, “Saturday Night Special.”

Jericho admitted he was dead wrong about Barker. “He got out there and instantly had the crowd in the palm of his hand. It was just the best. And obviously he’d been doing it for 50 years, he knows what to do.”

Jericho recalled his segment with Barker and playing “The Price is Right” with the legendary game show host. Here’s an edited version of the segment.

Jericho went on to discuss the segment and working with Barker.

“So at the time, I was the very angry, slow-talking, quiet Jericho. And Bob and I had to do a thing, and they wanted me to play The Price is Right.

And Brian Gewirtz was the head writer at the time, I said, ‘Why? I don’t want to do this. I’m not comedy Jericho, this is serious Jericho.’ He was like, ‘That’s why it’ll work. Just do comedy this one week, a couple things, just to remind people that you have that side to you. And then you can switch right back into asshole Jericho.’

“And so that’s what we did. And I’ll tell you what. When I went out there, and like, [Barker said] ‘You be a good boy, Jericho,’ or however it ended up.

You guys can go watch it on YouTube, it’s hilarious. When I went toe-to-toe with him, I said something to him like. ‘Barker, I’ll take you on any time, any place, anywhere.’

And I was just like [mimics trying to keep a straight face]. I didn’t laugh, but it was the closest I’ve ever come to completely breaking character with Bob Barker.”

Barker is still alive and kicking and will turn 97 this December. Jericho is once again playing the asshole heel every week on AEW on TNT.

[h/t to 411mania.com for the transcription]