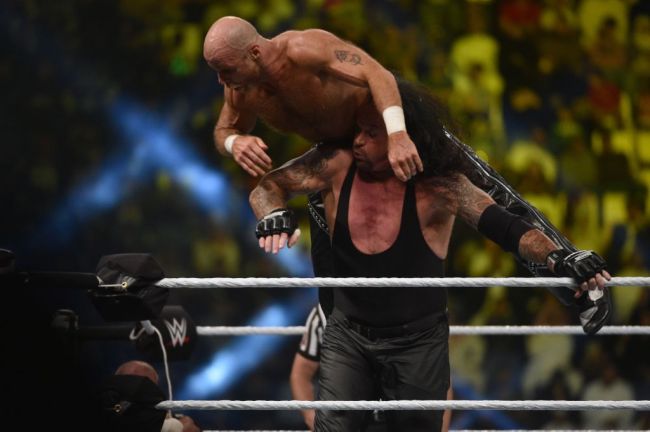 Chris Jericho has reinvented himself hundreds of times in his wrestling career.

His recent work with AEW is some of the best of his career, especially when working with younger talent like Orange Cassidy and Jungle Boy.

In a recent edition of Busted Open Radio, Chris Jericho explained how a match with Seth Rollins in 2016 changed his approach as a wrestler.

Jericho loved working with guys like Rollins, Roman Reigns, Cesaro, and Sami Zayn in the WWE because the younger talent forced the veteran to change his approach in the ring.

Specifically, the way matches were laid out and getting out of his “old school” way of working a match.

“I remember he (Rollins) wanted to do like two dives in a row, and in my mind, I was like that’s stupid.

I was taught you do one dive, you put it in the right spot, and that’s it. But times have changed – now two dives or three dives in a row is just what you do.

I remember that was a transition point for me. I could be a stick in the mud or I can get my head out of my ass and work like these guys that are 15 years younger than me and remain relevant.

That’s why that run in WWE was so successful.

I didn’t want to work with Kane, Hunter, or Shawn. I wanted to work with guys that are younger than me because it puts you in a different position.”

The discussion of Kane, Triple H, and Shawn Michaels reminded “LeChampion” of the “worst match” he saw in WWE. The match involved those three performers and The Undertaker.

“The worst match I ever saw, and here’s your clickbait, was in Saudi Arabia – Triple H and Shawn Michaels vs. Kane and Undertaker.

That was such a stupid idea in booking and it never should’ve happened.

It should’ve been Shawn and Hunter vs. Roman and Seth, and Taker and Kane vs. Cesaro and frickin’ Kevin Owens – whoever you want. That’s exciting.

But it’s like ‘We’ll just go out there and wing it, brother.’ That doesn’t work anymore.

Jericho jokes about his opinion being clickbait, and I’ll use the comment as such, but it’s important to note Jericho isn’t talking about the actual performance of all for Hall of Fame talents in the Crown Jewel match-up but that fans have seen those four lock-up hundreds and hundreds of times over the last two decades.

Here’s the full match if you want to watch before WWE finds it and takes it down.

As for his current gig working in AEW alongside a few former WWE talents, Jericho explained how those rivals and matches ended when the performers jumped over to the rival and how working with younger wrestlers has helped his career.

“It’s the same thing in AEW – there will never be a Chris Jericho vs. Matt Hardy match – never, never, never because we’ve seen that.

If you put it on, suddenly, it’s just two guys who worked 20 years ago in WWE.

That doesn’t make any sense.

So, I think it’s kept me relevant to work with these young guys and also learn from them and take these styles they have and put my psychology into it – Don mentioned the Isiah [Kassidy] match, and I almost mentioned that was one of my favorite matches because it was just last week.

It was as good of a match I’ve had in the last three years, it really was.

So that’s exciting because I took what he did and put it through the blender of what I do and suddenly you have a 49-year-old guy and 23-year-old kid having a great match, and that’s what wrestling is all about.”