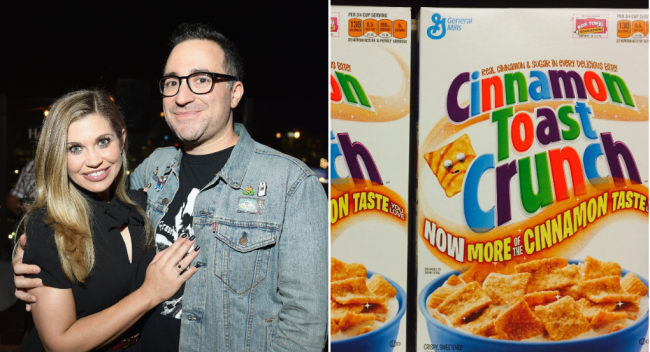 Whenever someone gets famous overnight on the Internet it’s only a matter of time until they get canceled or “milkshake ducked” as they say on the Internet.

Earlier this week comedian Jensen Karp, who we also learned was married to Danielle Fishel AKA Topanga from ‘Boy Meets World’, became an Internet sensation after he claimed he found two pieces of what appeared to be shrimp tails in his Cinnamon Toast Crunch cereal.

According to the social media tracking website Social Blade, Karp gained about 100k followers after going insanely viral in a two-day period.

Days after his viral post, several of Karp’s former ex-girlfriends have come forward to allege that he was abusive and a creep during their relationships.

“What you may not know about the man behind the viral posts” what like he’s a manipulative gaslighting narcissistic ex-boyfriend who once told me he was surprised I hadn’t killed myself because my life was so worthless?

That this is the most abusive person I have ever been with and I am crying as I type this. https://t.co/fCFKoFYV4w

The amount of women who DM’d me with stories today. Let alone the ones I have known about for years and talked to about our shared experiences. Oh lord

Getting lots of texts from girls still in therapy over his terror. At least we have this fun little club!

Karp has laid low amid the accusations that he was abusive in his previous relationships and has yet to comment on them.