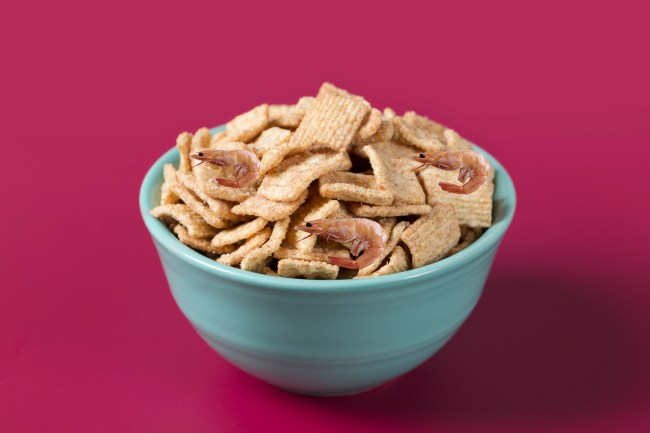 Don’t get me wrong — finding shrimp in your cereal is absolutely disgusting. But I’d argue that more troubling than the discovery itself is the series of events that led to the shrimp mingling with cereal in the first place. Like, um, does General Mills have a seafood business we don’t know about? Secretly slinging fish on the side? General Mills, the King of the Pescatarian Black Market? Are they the ones who make the freeze-dried shrimp that go in store-bought packages of noodles? I simply need answers and I need them now.

And the response from Cinnamon Toast Crunch, and brands in general in this situation, absolutely cracks me up. “Oh, hey Jensen, sorry about the vaguely horrifying shrimp tails you found in your breakfast cereal — why don’t you slide in your DMs so we can mail you another fresh box of our $4, non-shrimp tainted cereal! Sorry for the inconvenience!”

We’re sorry to see what you found! We would like to report this to our quality team and replace the box. Can you please send us a DM to collect more details? Thanks!

Then, perhaps most shockingly, they tried to straight-up tell Karp that he was wrong, claiming the shrimp-looking items were actually just “an accumulation of the cinnamon sugar”. GUYS.

After further investigation with our team that closely examined the image, it appears to be an accumulation of the cinnamon sugar that sometimes can occur when ingredients aren't thoroughly blended. We assure you that there's no possibility of cross contamination with shrimp.

Frankly, I’d be shocked if Mr. Karp here ever at Cinnamon Toast Crunch again. That’d be like returning to a restaurant the week after you got food poisoning.

We understand your concern. We promise you that our team will look into this and get to the bottom of it – but in the meantime, we want to do everything we can to make this right. We'll need further details to research.

Unfortunately for CT Crunch, it only got worse from there, as Karp dove further into the bag and found other equally disturbing items, such as a string, dental floss, and even rat poop. Though the shrimp was as bad as it got? Think again (seriously, brace yourself, because the rat poop thing is legitimately nauseating).

I was convinced to go back through the bag, since when I first noticed the shrimp tails, I freaked out and closed the box. Here’s all my findings, which also now includes a weird little string? pic.twitter.com/mRDUhqG3I8

UPDATE: my wife has a stronger stomach than me and checked the OTHER bag in the family pack. This one seems taped up (?) and also appears to include…(I don’t even want to say it)…dental floss. pic.twitter.com/yKPkpx7PWq

For real – someone tell me they aren’t like maggots or bugs. Is it shrimp adjacent? (also just found this weird cinnamon covered pea thing?)
I wish this was a joke. pic.twitter.com/7pCs0TJCpv

So, yeah… it goes without saying I probably will be skipping the Cinnamon Toast Crunch for a while, as well. I’ve always been more of a Kellogg’s guy, anyway.

And as for Cinnamon Toast Crunch, General Mills, and all corporate brands out there, a piece of advice: when someone expresses overwhelming disgust with your tainted product, perhaps avoid simply offering them more of it. Because yikes.