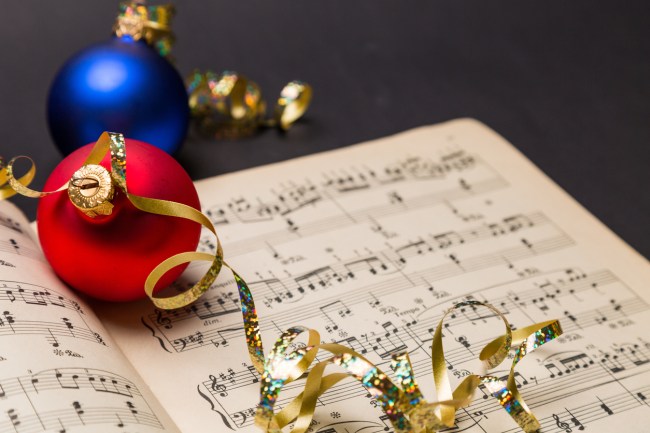 Christmas songs—specifically Christmas classics—are a funny thing. They are overwhelmingly present throughout the month of December, (almost) everyone loves them and knows a lot of them by heart (or close enough), and we all have our favorites.

But where do they come from? Which version is the real version? Is there a real version? Are chestnuts roasting on an open fire even good (let alone safe)?

Some classic Christmas tunes have been around for well over fifty years and have been recorded and performed on so many different occasions that the original version has often become a victim to the inevitable passage of time.

While that is somewhat of a bummer for whoever originally did the song, it’s also sometimes for the best, as an original version of a song doesn’t necessarily mean it’s the best version of the song.

With that said, I did some research, found this list of 51 Christmas classics courtesy of the fine people at Good Housekeeping, picked twenty of them, and then set out to figure out which version of the song was best.

Someone had to do it, and yes, that someone was me because it’s the holidays and that’s what people who write for websites do.

If you think Autry was the first person to record this song then you are as wrong as some of the messages in the Rudolph special are.

Ol’ Gene Autry was definitely an early performer of the song, but by the time he recorded a version of the tune in 1949, it was a decade old (it was written by Johnny Marks and his brother-in-law in 1939).

We thank them for their service but this is Autry’s song.

Other people who have recorded “Rudolph” include the Jackson 5, Alvin and the Chipmunks, Destiny’s Child, and (of course) Burt Ives, who recorded a take for the aforementioned TV special.

“Frosty the Snowman”: The Ronettes

Our good friend Gene Autry was the first person to record “Frosty the Snowman” and his version is fine. It is totally acceptable and gets the job done in a pinch.

However, The Ronettes’ version is the real deal; hot enough to melt even the most magical of snowmen.

Released in 1963, the song was part of a compilation album put together by producer Phil Spector, A Christmas Gift for You from Phil Spector. The album features Spector’s famous Wall of Sound production style as well as artists Spector was working with at the time including Darlene Love (who shows up on this list a little later).

Hey, we all do things sometimes just because it’ll make our parents happy. It’s part of the gig when it comes to being a son or a daughter.

David Bowie is no exception.

Bowie made a somewhat surprising appearance on Bing Crosby’s Merrie Olde Christmas special in 1977 partially because he was attempting to move on from his younger, wilder days but also because he “just knew my mother liked him.”

“It’s all cold down on the beach.”

“The winds wipin’ down the boardwalk.”

Die Hard is a movie that takes place during Christmas but you can watch it all year round. “Let It Snow” is not just a Christmas song; it also has no place in our lives outside of December.

Case closed (on both counts).

Before moving on, we would like to award Honorary Mention to Paul Rudd for his “version” of the song, which appeared in Forgetting Sarah Marshall. It should also be noted that that movie is incredibly rewatchable.

Okay, now we can proceed.

I’m not going to lie. This version edged out others thanks in large part to the video, which is hilarious and I love it so, so much.

I love how delightfully cheesy it is and I love the looks Hall and Oats make and how their eyes ARE OPEN SO WIDE. I love how they walk around the house and I love how legendary guitarist G.E. Smith dutifully plays the role of Old Lady Who Secretly Shreds.

I love how those trouble makers are not allowed in because this is not that kind of Christmas party.

“It’s Beginning to Look A Lot Like Christmas”: Michael Bublé

Bublé was going to get on this list at some point. It was just a matter of time.

If I’m in need of some extra money at some point (totally possible), keep an eye out for a sequel to this piece: Here Are the Best Versions of Twenty Classic Christmas Songs: The One With Just Michael Bublé Songs.

Everyone knows that nine times out of ten sequels are cash grabs.

The second Godfather and the Hot Shots sequel are the only exceptions.

This version of “Winter Wonderland” also appeared on A Christmas Gift for You from Phil Spector, and much like The Ronettes’ version of “Frosty,” it’s of the highest possible quality.

I want Darlene Love to perform all the Christmas songs. Every single one of them, even the weird ones like “Grandma Got Run Over By A Reindeer.”

Is that too much to ask?

The King beat out that pesky Bublé fella and Dean Martin to take home the title of Best Version of “Silver Bells” (although to be fair, Martin’s is an extremely close second. It’s razor-thin between the two).

I like the twang of Presley’s version and the haunting background vocals. It feels more genuine and I respect that.

A fun fact is that Martin’s version of the tune appeared on The Dean Martin Christmas Album and according to Martin’s son Ricci, it was the only Martin album that was allowed to be played in the Martin house.

The others were just laced with profanities and included satanic imagery on the covers, which we all know is just not suitable for children.

I don’t know if any singer dead or alive sings about dreams better and with more emotion than the late, great Otis Redding. His voice has so much passion to it, has so much life, and the experiences that come with life to it.

When he sings that he wants your days to be merry and bright, he effin’ means it, man.

The Bing Crosby version, which is the original, might be the most well-known and the one that has sold the most copies but it doesn’t stir something in my belly and charge up my emotions like Redding’s does.

“Rockin’ Around the Christmas Tree”: The Brian Setzer Orchestra

With all due respect to Brenda Lee, rockabilly G.O.A.T. Setzer and his crew have the better version of “Rockin’ Around the Christmas Tree.”

Lee’s version of the song is sweet and endearing and definitely reminds me of my childhood (it was one of a handful of Christmas albums my parents had) but it doesn’t have what sounds like a one hundred-piece horn section on it.

Nor does it have Setzer’s guitar and swagger.

Also, maybe it’s just me here, but I always thought his name was Brian Seltzer. But it’s not. It’s Brian Setzer.

You learn something new every day, I guess.

This song was written in the summer. That’s kind of wild.

Apparently, the guys who wrote it, Mel Tormé and Robert Wells, wrote “The Christmas Song” while in the midst of an incredibly hot summer as the writers were attempting to “stay cool by thinking cool.” I get that. Although for me it’s usually the other way around, as I’ll listen to reggae during an especially cold winter day as a way to remind me of summer.

Other artists who have taken swings at the song include Whitney Houston, Ella Fitzgerald, Frank Sinatra, Stevie Wonder, and Bing Crosby—none of who have shit on Nat.

“Have Yourself a Merry Little Christmas”: Ella Fitzgerald

“Have Yourself a Merry Little Christmas” is generally performed slower and with a more melancholy vibe, giving it an air of serenity and peacefulness. There is absolutely nothing wrong with that and versions that adhere to that model are wonderful more often than not.

But Ms. Ella Fitzgerald throws down some jazz on her take, giving it more of an upbeat feel.

If you’re interested in doing a little deep-dive into the history of this particular song, I’d recommend this interview that songwriters Hugh Martin and Ralph Blaine did with NPR a while back.

Although just a heads up, the interview is neither jazzy nor does it have an upbeat feel.

It just sounds like an interview, albeit an informative one.

There could have been other versions of “Jingle Bells” here, but none of them make you ask out loud “What the hell is going on here?” like Streisand’s does.

She is singing very fast on this song. So incredibly fast.

And it’s not like, punk rock or speed metal fast. It’s more like “wacked out, acid jazz” fast.

Babs’ vocals on this song are like my dog running around our backyard in that they are frantic, done with seemingly little rhyme or reason, often maniacal, and when they’re done, they’re done.

I love this song, though. It makes me laugh.

You could pick the Bing Crosby version.

You could pick Elvis’ version.

All you Pentatonix heads out there would probably lean towards their version.

I’m going with the Reverend.

This is only one of two entries in this list where the original version prevails.

In this case, picking any other version of this song over Love’s would be damn near sacrilegious. It’d be insulting and most likely cause for dismissal.

Dismissal from where you ask?

You would be dismissed from everywhere and (don’t worry) we’ll take care of your things. Just get the hell out.

“It’s the Most Wonderful Time of the Year”: Andy Williams

And here is the second song that is an original version.

You know, I checked out a Harry Connick Jr. version to see if that had a shot of dethroning Mr. Williams and that’s a negative. Connick’s take isn’t nearly as fun as the original is and, yes, this is a fun song.

It’s like a roller coaster ride you go on after you’ve injected hot chocolate straight into your veins.

Homeboy’s been on the fringes and margins of this list from the jump but you knew he’d be on here at some point.

Ives’ version of “A Holly Jolly Christmas” actually re-entered the Billboard Hot 100 chart in December 2018, returning to the chart after nearly 57 years. This marked the longest break ever for a song to appear on the Billboard charts.

Now, is Burt Ives his real name? Who knows? It kind of doesn’t seem like it but it also kind of does and we could look it up but we’ll save that for a later date.

If not for Springsteen’s version of “Santa Claus is Comin’ to Town,” the Jackson 5 would have appeared earlier on this list because their take on that song is fantastic and has a sweet, low key groove to it.

This tune has a great, authentic Motown vibe to it, and while the message from Michael that kicks it off hasn’t aged all that well, I’ll let it slide.

Or you can just skip ahead twenty seconds.

No one will blame you.

Certain genres just lend themselves so well to producing fun covers of classics.

Ska is always a winner. Same with reggae. You can also drop a jazz version of almost any song.

Surf music isn’t nearly as prominent as it once was, but in its heyday, bands who played surf music could always be counted on when it came time to put a unique spin on a classic tune.

The Johnny Mathis version of “Sleigh Ride” is great and definitely more popular and I almost went with The Ronettes’ version, but damn it, no one is doing surf rock anymore and that might be the biggest issue facing this great nation of ours right now.

We need to address it before it’s too late.