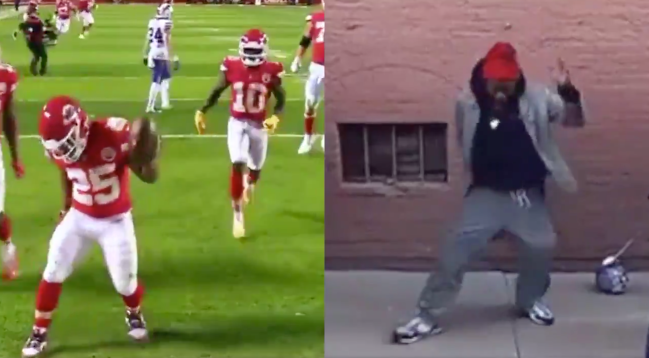 Kansas City running back Cylde Edwards-Helaire wins the award for the year’s best touchdown dance. The national championship running back was selected with the last pick in the first round by the reigning Super Bowl champions in the 2020 NFL Draft and has had an impressive rookie season thus far. He added to his resume on Sunday by scoring his first postseason touchdown to give the Chiefs a 21-9 lead over the Bills in the first half of the AFC Championship game. After going completely untouched into the end zone, he pulled out a Dave Chapelle reference and hit the Tyrone Biggums dance in front of the Showtime Camera.

The celebration was an homage to Dave Chappelle and a character on his longtime sketch-comedy series on Comedy Central. Biggums, who Edwards-Helaire is replicating in this instance, was a squeaky-voiced crackhead with a constant addict’s itch and white, blistered lips. His catch phrases are “I smoke rocks” and SHAZAM!” which coincide with his eccentric energy and goofy dance moves. Biggums loves eating peanut butter and crack sandwiches, and was the spokesman for an energy drink he made from cocaine called “Red Balls.”

It wasn’t a glaringly obvious reference from Edwards-Helaire, but that’s what made it so awesome. It came naturally, but it almost didn’t happen at all. The 5-foot-7, 21-year-old had not played since Week 15 against the New Orleans Saints when he injured his leg on an awkward tackle. He found paydirt in his return, which just so happened to be his first postseason game in the NFL.

He was the team’s leading rusher, but with a quarterback like Patrick Mahomes and a running back room on the mend, there wasn’t much need to run the ball often.