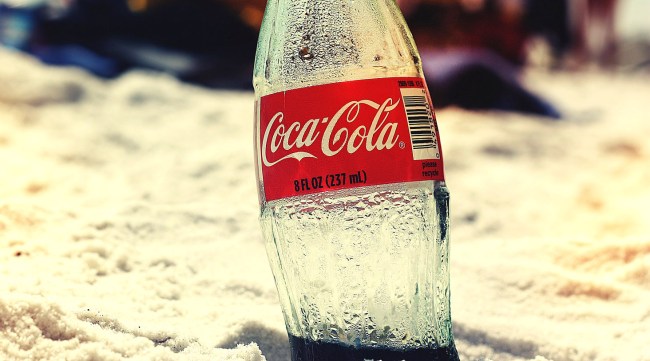 As someone who wants to help out the environment, but sighs every time he receives a paper straw in a soft drink (because it will fall apart before finishing said drink), this news that Coca-Cola is going to be testing out a paper bottle inspires very mixed feelings.

“2,000 consumers will soon receive Coca‑Cola’s first ever drink in a paper bottle prototype, set to be tested in the market for the first time this summer,” reads a press release from Coca-Cola Europe. “The innovative new packaging format will be trialed in Hungary with Coca‑Cola’s plant-based drink, AdeZ, in just a few months’ time.”

The new paper bottle prototype is being developed as part of a partnership between scientists at Coca‑Cola’s Brussels Research and Development laboratories and Danish startup The Paper Bottle Company (Paboco).

The Paper Bottle Company is also working with vodka-maker Absolut who will be testing out 2,000 paper bottles in the UK and Sweden for its pre-mixed, carbonated raspberry drink.

Michael Michelsen, The Paper Bottle Company’s commercial manager, says this testing will help determine if the bottles are strong enough to do the job.

“We have a good understanding already of what the bottle will go through as we put it into the real world. But there is a certain point where you just can’t design yourself out of this at a desk, right?” Michelsen told BBC.

The bottle currently consists of a paper shell with a recyclable plastic lining and cap, but Coca-Cola plans to eventually produce a bottle without the plastic liner that can be recycled as paper.

“The trial we are announcing today is a milestone for us in our quest to develop a paper bottle,” said Daniela Zahariea, Director of Technical Supply Chain & Innovation for Coca‑Cola Europe.

“People expect Coca‑Cola to develop and bring to market new, innovative and sustainable types of packaging. That’s why we are partnering with experts like Paboco, experimenting openly and conducting this first in-market trial. It’s part of delivering on our World Without Waste goals.”

While the intentions are obviously grand, many on the internet are not entirely thrilled with the idea of a 100 percent paper drink bottle, and most of them wondering why we don’t just go back to using glass bottles instead.

or maybe ..... just make REUSABLE GLASS ONES with a return reward at stores (think like they do with milk bottles in other countries)

and yet, we have literally glass, which is simpler and more eco solution, with refillable option and easy return to stores

What's wrong with the good old glass bottle like we used to have and return for wash and reuse simple!!!

Some material substitutions makes sense. Like PVC pipes replacing prone-to-rust iron ones. Or more disputable, PET vs glass bottles. But, a paper bottle just to make it look “greener” AND produce a hell of waste not accepted in paper recycling plants? Non sense

If the paper bottles are as bad as the paper straws, then I hope not 🙏🏻🙏🏻🙏🏻

That’s what I am saying!