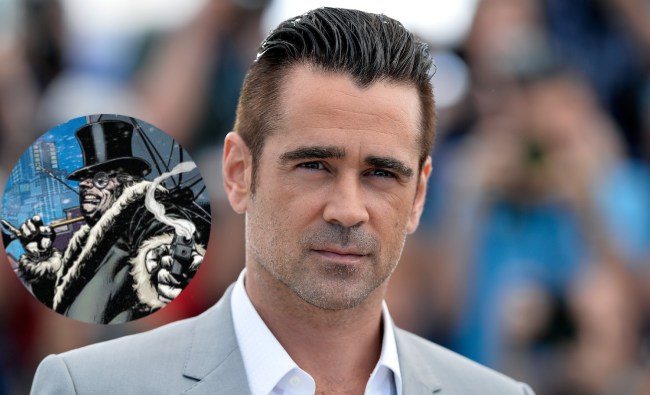 With the production of the film kicking off in London, an eagle-eyed fan was able to spot Colin Farrell in costume and wig as infamous Gotham City crime boss Penguin. Not only can Farrell be seen wearing a gray wig, but he’s also carrying a long, black umbrella, which has been a staple of Penguin’s look (and arsenal, as it’s usually weaponized) ever since the character was introduced. (Farrell can be seen in the bottom-right image).

Is this London or Gotham…..?
Filming The Batman 🦇 outside my offices this morning! 👍 @empiremagazine pic.twitter.com/Mszt5wLcYG

Additionally, Pattinson was snapped on set in Bruce Wayne garb. Pattinson is set to be portraying a younger version of the iconic Gotham billionaire, so seeing him in motorcycle-riding streetwear as opposed to $10,000 tux should come as no surprise.

The first set photos of Robert Pattinson as Bruce Wayne in ‘THE BATMAN’ have seemingly been revealed. (Source: @WadeGrav) pic.twitter.com/PeQVP8IdOZ

In addition to Farrell and Pattinson, The Batman — which is set to hit theaters in the United States on Friday, June 25, 2021 — stars Zoe Kravitz as Selina Kyle/Catwoman, Paul Dano as “Edward Nashton”/Riddler, John Turturro as Carmine Falcone, Jeffrey Wright as Gotham City Police Commissioner James Gordon, and Andy Serkis as Alfred Pennyworth.

Additionally, Peter Sarsgaard as been cast in an undisclosed role, although there is speculation he will be playing Gotham City district attorney Harvey Dent, who tragically and eventually turns into Two-Face.

Given the talent that Warner Bros. has accumulated for The Batman, there are certainly reasons to be excited about the project, although, given their recent history of botching the character, we aren’t getting our hopes up until we see the first trailer (which will probably drop this Fall).