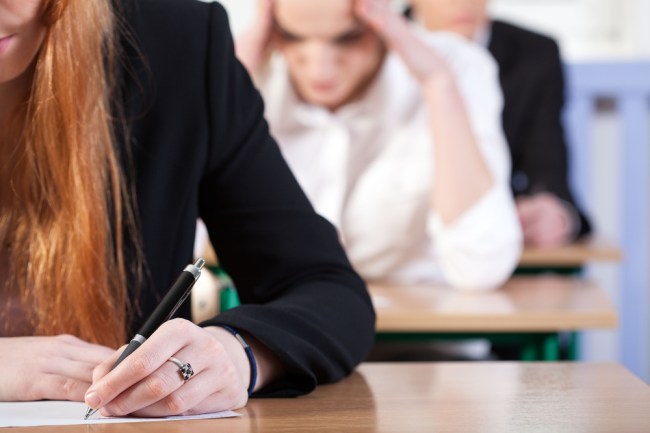 The phrase ‘work smarter, not harder’ was coined by Allan F. Mogensen way back in the 1930’s, and it’s the first thing that came to my mind when I saw this story of a Maryland community college student beating the system.

Reb Beatty is an Assistant Professor at Anne Arundel Community College, and for the first exam of the semester he told his students they could use a ‘3×5 notecard’ as a cheat sheet with formulas, definitions, etc. He was shocked when one of his students showed up for the accounting exam with this:

What happened? Well, the assistant professor never actually specified ‘inches’. Most people, myself included, would see ‘3×5 notecard’ and just assume that inches were implied (which they were). But, since professor Reb Beatty never actually specified ‘inches’ he was forced to allow the student’s 3×5 foot posterboard of notes. If you can’t see the caption from the Facebook embed above, here’s what it says: “First test day of the semester and as always, I allow a 3×5 notecard. Today, a student shows up with this. Sure enough, it is 3×5… feet. As precise as I am, apparently I never specified inches and therefore yes, it was allowed.”

I truly hope that student scored a 100 on that exam for their efforts because they’re never going to have a shot at such an easy exam again. Seriously. Sure the professor found it funny and they allowed the 3×5-foot note board, but they’ve now been exposed as being vulnerable to exploitation. I’d be SHOCKED if the next exam isn’t the hardest test they’ve ever written. Nobody likes being exposed, especially not academics.