Comedy Central Is Rebooting ‘Ren & Stimpy’, One Of The All-Time ‘How’d They Let Kids Watch This?’ Shows 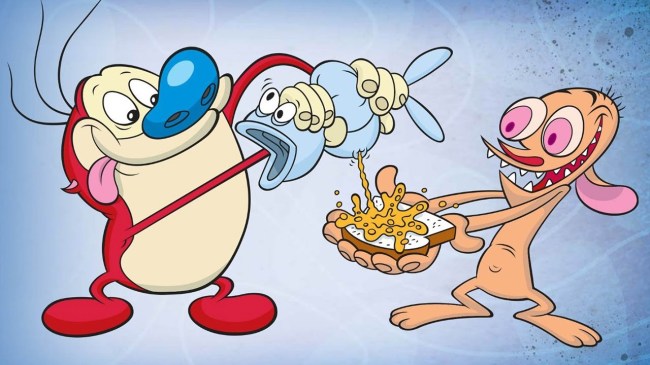 What a blast from the past. In case you were too old or too young, The Ren & Stimpy Show was this totally gonzo adult cartoon that somehow aired on Nickelodeon despite being overtly, uh… disturbed.

The news was announced in an official statement from Comedy Central, who also recently announced that they were rebooting Beavis and Butt-Head with original series creator Mike Judge.

“I want to thank our partners at Nick Animation as we re-imagine these iconic characters with a new creative team,” said Nina L. Diaz, President of Content and Chief Creative Officer for ViacomCBS Entertainment & Youth Group.”

“We are excited to reinvent this iconic franchise with a new creative team and our partners at the Nickelodeon Animation Studio,” said Chris McCarthy, President of ViacomCBS Entertainment & Youth Group. “Ren & Stimpy joins our rapidly expanding roster of adult animation including South Park, Beavis and Butt-Head and Clone High as we continue to reimagine our treasure chest of beloved IP for new generations.” [via Comedy Central]

While sneaking sexual innuendos and double entendres into children’s cartoons is certainly not unique to The Ren & Stimpy Show, the nature of the series’ humor was far darker than any of its contemporaries.

As Wikipedia points out, several episodes of the original Ren & Stimpy Show had violent, gruesome, or suggestive scenes shortened or removed, including a sequence involving a severed head, a close-up of Ren’s face being grated against a man’s stubble, and a scene that was shortened where Ren receives multiple punches to the stomach from a baby.”

Again, this is a series that was aired on a children’s network for three whole years. The 90s, man, what a time to be alive.

RELATED: A ‘Beavis and Butt-Head’ Reboot In The Works At Comedy Central From Original Series Creator Mike Judge