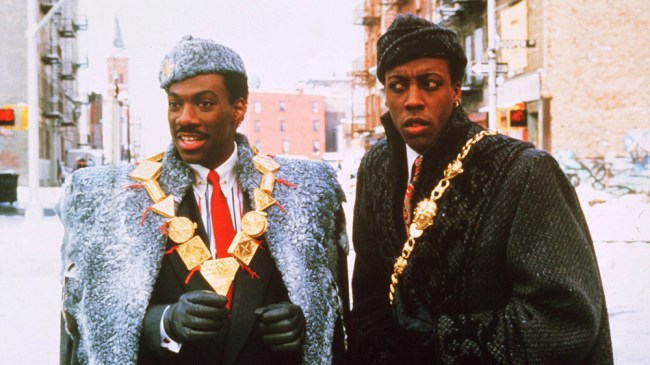 Coming to America was released on June 29, 1988, and instantly became a comedy classic thanks to the legend that was Eddie Murphy. The romantic comedy directed by John Landis about a wealthy African prince from the nation of Zamunda roughing it in Queens, New York, to find his true princess will get a sequel. There were rumors of Coming to America 2 for some time, but Eddie Murphy and Arsenio confirmed the sequel in a photo.

Academy Award-winning costume designer Ruth E. Carter broke the exciting entertainment news on her Instagram. Carter, who won an Oscar for Black Panther, shared a photo of Prince Akeem and Semmi with the caption: “GOOD MORNING MY NEIGHBORS! It’s official! Preliminary fitting for Coming to America 2 with Prince Akeem, Semmi and Oscar.”

The Coming to America sequel will be directed by Craig Brewer of Hustle & Flow and Empire fame and the script is written by Kenya Barris, who is the creator of Black-ish and the screenwriter of Girls Trip. Will it be called Coming 2 America?

After nearly 31 years, Eddie Murphy is set to return as Prince Akeem, Hall as Semmi, and the 88-year-old James Earl Jones will of course play King Jaffe Joffer. No other actors from the original film have been confirmed. Coming to America 2 is on track to have a release date of August 7, 2020.

I don’t know, this is a much different climate when it comes to jokes and political correctness than in 1988. “The royal penis is clean, your Highness,” might not fly in 2019. People would surely be “outraged” about the bar dating scene from the original and the “bark like a dog” scene. This sequel will be forced to have a very different vibe than the original.

Not to mention that Eddie Murphy has not made a hilarious non-animated movie since arguably 1989’s Harlem Nights. Eddie, who was an absolute comedy genius in the 1980s, has a string of unsatisfying sequels and box office bombs starting in 1990 with Another 48 Hrs. and Beverly Hills Cop III in 1994. Don’t forget The Adventures of Pluto Nash and Daddy Daycare. Ooof. Since then Murphy has made quite a living being a cartoon donkey.

Hopefully, Maurice moved on from washing lettuce to fries or maybe grill. Who knows, by now he might even be an assistant manager at McDowell’s. That’s when the big bucks start rolling in.