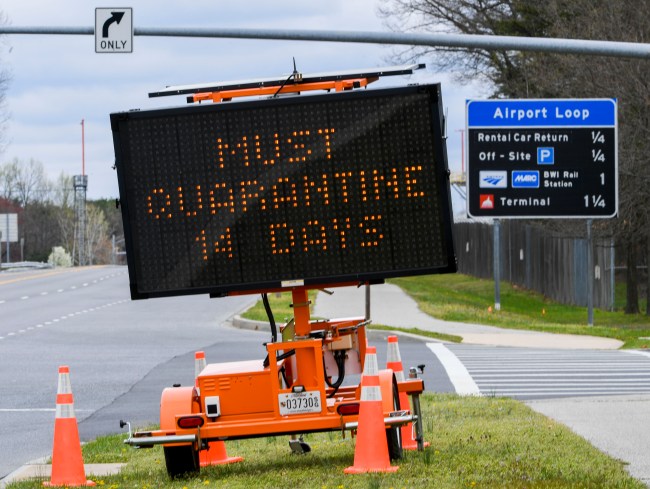 Two Connecticut residents returning from states under the travel advisory mandate were issued fines on Monday by the Department of Public Health for travel violations, becoming the first Americans fined for such infractions.

According to NBC Connecticut, one person returned to Connecticut from Louisiana and the other from Florida. Both people were issued $1,000 fines for not filling out travel forms required upon returning home from states with high coronavirus infection rates, and one was charged an ADDITIONAL $1,000 for refusing to quarantine for the state required 14 days.

Dr. Anthony Fauci joined me this afternoon to share his thoughts on what Connecticut has been doing right to make progress in keeping cases of COVID low and what we need to do to ensure we keep it that way. pic.twitter.com/FryKrW4aTe

The fines were issued based on tips sent in to the Dept. of Public Health.

“I hate to do it, but we’re going to be serious and show people we’re serious about this,” Lamont said.

“Overwhelmingly, people are doing the right thing. For those few of you who aren’t, please be on notice.”

The sentiment is understandable, we need to be diligent to overcome this thing, but with 51 million Americans out of work and the government at an impasse over the second stimulus package, four-figure fines for travel seems a bit excessive. Americans need help, not punishment.

At the time of this writing, 32 states are included in the on the shared travel advisory list that applies to people heading to Connecticut, New York and New Jersey. The methodology: if they have a 10 percent or higher positive coronavirus infection rate over a seven-day rolling average, or a new daily positive test rate higher than 10 per 100,000 residents, the New York Post reports.

The governor also announced that documentation will now be required for mask exemptions and said the state will be cracking down on large gatherings.

Connecticut’s death toll is currently at 4,444, and the positive test rate over the last week was 0.7%.

➡️8,338 tests were administered, 117 came back positive (1.4% positivity rate)
➡️70 patients are hospitalized (increase of 6)
➡️Thankfully there have been no COVID-related deaths reported today