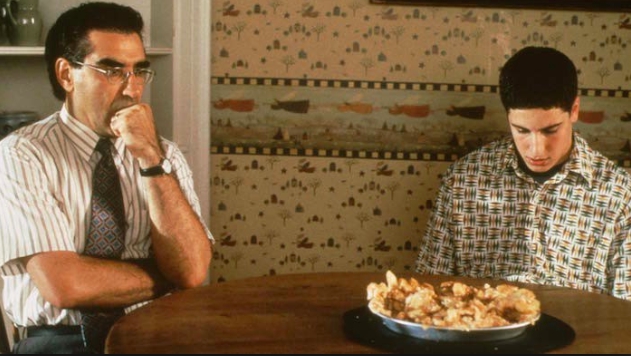 Last month, I took some CBD oil (which is weed for professionals who get panic attacks) and threw on American Pie in hopes it would stir up old memories of my high school ex. Nina, call me back. Watching it as a 30-year-old and through the lens of a shifting cultural climate that will stop at nothing until no one’s feelings are hurt, my main takeaway was pure shock. How the fuck did this movie get made.

I’d imagine the pitch meeting to go something like this:

Screenwriter: Here’s the script for a cumming-of-age tale that follows the journey of a group of high school guys who look 35 struggling to deal with the emergence of their sexuality at a time when adolescent pressures are ubiquitous.

Screenwriter: Yeah and an essential plot point will be the totally illegal exploitation of a foreign exchange student who is streamed getting naked to the entire town. A Class A felony, but if Jason Biggs stutters and acts like a complete beta, I think we can get away with it.

Screenwriter: How about if the entire Blink-182 band watches this totally oblivious girl get naked?

Screenwriter: Nothing. Thanks for the check!

Our guy Cool Dude Bro is back again to poignantly dissect the absurdity of the 1999 comedy classic in under two minutes. Buckle up my friends, we’re taking a trip down Memory Lane in Oz’s Ford Fusion! What a tool!

For more hilarious movie reviews in under two minutes, check out Cool Dude Bro’s Rudy review. Oh, and the Jaws one.