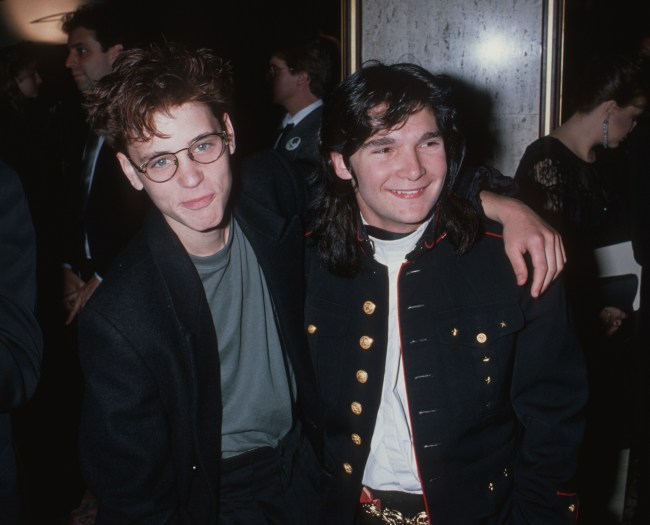 For about three years, Corey Feldman has been teasing a documentary that reveals sexual predators in Hollywood who abuse child actors. On Monday night, Feldman premiered his new documentary (My) Truth: The Rape of Two Coreys and named Charlie Sheen as one of the abusers.

Corey Feldman hosted the premiere of (My) Truth: The Rape of Two Coreys in Los Angeles, but not without issues. Besides the live premiere, there was also a livestream on the (My) Truth website for the price of $20. However, the site had technical difficulties, to which Feldman insinuated that powerful individuals were attempted to stop the livestream of the doc.

“You’re seeing it for yourself how people don’t want this to happen,” Feldman told the crowd. “Please be patient. The hackers are trying to prevent the stream from airing. The program will begin momentarily. We appreciate your patience and support!”

Feldman’s technical team said, “We are seeing an attack,” to which Corey responded, “this is crazy.”

@Corey_Feldman has just been told by his technology team the screening has been hacked: “we are seeing an attack”, to which Corey responded “this is crazy” #coreyfeldman #mytruthdocumentary pic.twitter.com/WZMGH3aHge

THE FILM IS STARTING 15 MIN LATE DUE 2 THE WEBSITE CRASHING! WHICH IS ACTUALLLY A GOOD THING! SO #STAYTUNED pic.twitter.com/onYiNJodFs

The documentary eventually started, and Feldman named the people who allegedly sexually abused him and his fellow child actor friend Corey Haim. In (My) Truth: The Rape of Two Coreys, Feldman accuses Charlie Sheen of sexually assaulting Haim. During the filming of the 1986 Steven Spielberg film Lucas, Feldman said that Sheen sodomized Haim. Feldman “went into great detail” about the alleged rape, according to Entertainment Weekly.

“This wasn’t like a one time thing he said in passing. It wasn’t like ‘Oh, by the way, this happened,'” Feldman said in the doc. “He told me, ‘Charlie bent me over in between two trailers and put Crisco oil on my butt and raped me in broad daylight. Anybody could have walked by, anybody could have seen it.’”

At the time of the alleged attack, Sheen was 19-years-old, and Haim was 13. Sheen has denied allegations that he sexually assaulted Corey Haim. “Charlie Sheen categorically denies these allegations. He absolutely denies the claim,” Sheen’s representative in a statement.

The 48-year-old former child actor said two “industry men” allegedly molested him at the age of 14.

The two Coreys documentary was released on the 10th anniversary of Haim’s death. The 38-year-old Haim died in 2010, and his cause of death was pneumonia, according to the Los Angeles County Coroner’s Office.