Coronavirus Could Be 15Xs More Fatal Than Flu, Spread By Breathing, Will Last For Months Says Infectious Disease Expert On ‘Joe Rogan’ 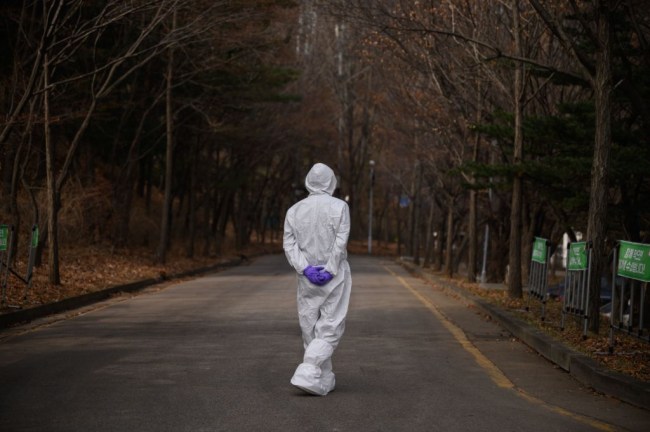 Michael Osterholm appeared on the Joe Rogan Experience podcast on Tuesday to give his expert insight into the coronavirus crisis happening around the world. Osterholm is thoroughly educated on disease outbreaks and is a public health scientist and a biosecurity and infectious disease expert, director of the Center for Infectious Disease Research and Policy (CIDRAP) at the University of Minnesota and a Regents Professor, the McKnight Presidential Endowed Chair in Public Health, a Distinguished Teaching Professor in the Division of Environmental Health Sciences, School of Public Health, a professor in the Technological Leadership Institute, College of Science and Engineering, and an adjunct professor in the University of Minnesota Medical School, all at the University of Minnesota. He is also on the Board of Regents at Luther College in Decorah, Iowa.

Michael Osterholm is a self-described “medical detective” who has tracked down infectious diseases, trying to stop them, and find out where they came from. He provided his expertise on the ever-changing COVID-19 situation that is full of misinformation.

“It’s just beginning,” Osterholm warns of the coronavirus outbreak. “In terms of the hurt, pain, suffering, death that has happened so far is really just the beginning. This is going to unfold for months to come. We’re gonna be in some hurt for the next few months.”

Osterholm has a friend of a friend who works at the largest hospital in Milan, Italy. Apparently, the situation in the hospital is so dire that physicians are “deciding who they are going to let die.” The health worker added that doctors and nurses are no longer being screened for coronavirus because they needed as many physicians as possible.

Michael points out that the coronavirus can be transmitted just by breathing in the air.

Osterholm points out that people who show no symptoms could be a carrier and infect people through breathing. Osterholm says that hand sanitizers are great against many infectious diseases, but are not as effective against the coronavirus. He also said that the “whole issue of using your hands and touching your face” is probably not the primary way the COVID-19 spreads. “The data is actually very weak that the virus is going to be transmitted this way.”

Osterholm warns that the data suggests that “just breathing air” is how the coronavirus spreads. He says that wearing a mask won’t stop you from getting the coronavirus, but if you are sick, it can help prevent you from spreading the disease.

“The N-95 respirator is very effective, but the problem is that we have a shortage,” Michael said. “Hospitals don’t have the budgets to stockpile them.”

Osterholm warns that a huge concern for Americans because we are so dependent on China since they make most of our medical supplies as well as our medications.

Osterholm told Joe Rogan that the population may have to wait this out. A vaccine isn’t anywhere near to being developed. The longer the novel coronavirus is around, the more people get infected. The people who recover will build up an immunity, meaning they were less likely to get infected.

Joe asked how a person can build up their immunity to combat the coronavirus. Osterholm responded by saying that people should stay in shape, eat a healthy diet, get enough sleep, limit alcohol intake, and take your other medications regularly, and don’t miss taking them. When asked about IV vitamin drips, Michael said, “We don’t have any data that those substantially impact on your immune system to make it better.”

Osterholm notes that children are getting infected, but they aren’t getting sick. He adds that we don’t have the research to determine why this is happening. He pointed out that people over 55-years-old or those who have underlying health issues should avoid public places.

Osterholm points out that cruise ships are not designed well for infectious diseases such as the coronavirus. The virus is transmitted into the air, it goes into vents, and then it is recirculated around the cruise ship. He notes that the worst thing to do with an infectious outbreak on a cruise ship is to quarantine them because it will spread through the ventilation system even if people are locked down in their rooms.

Joe Rogan asked if going into a sauna with hot and humid air would kill the COVID-19, but Osterholm dismissed that idea quickly and said saunas don’t kill the respiratory disease at all.

Osterholm said that there is no evidence to support the idea that the coronavirus is a biological weapon or that it originated in a level 4 (the highest biosafety level) research laboratory in Wuhan.

“This thing clearly jumped from an animal species to a human probably in the third week of November,” Osterholm told Rogan. “Pangolins, these scaly anteater-like animals, are a very good source because we have coronaviruses just like those in these animals, and it got into a human.”

“I don’t believe there’s any evidence that it’s an intentional release or an accidental release or an engineered bug,” Osterholm said. “We could not have crafted a virus like this to do what it’s doing. We don’t have the creative imagination or the skillset. Mother Nature does it so much better than we could ever do.”

Osterholm said that people in the White House have contacted him on advice for the coronavirus outbreak. He served as a science envoy for the Trump administration as well as for several governors in the past. “I’ve talked to a lot of people at the CDC and Health and Human Services, etc, yeah, we’ve given a lot of advice.”

“This is going to be challenging, but we are going to get through it.”

You can see more information about the COVID-19 at the Novel Coronavirus Resource Center on the website for the Center for Infectious Disease Research and Policy (CIDRAP).

Michael Osterholm wrote a book in 2017, Deadliest Enemy: Our War Against Killer Germs, outlining how “infectious disease has the terrifying power to disrupt everyday life on a global scale, overwhelming public, and private resources and bringing trade and transportation to a grinding halt.”