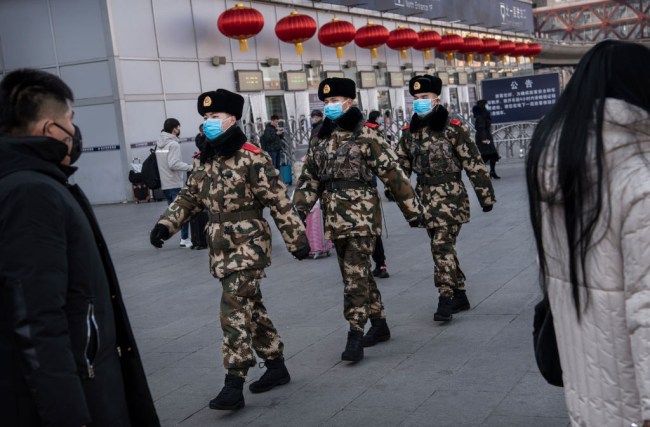 The latest updates on the coronavirus show that the death toll from the respiratory illness is at 811, including 89 killed in the last 24 hours. There are now more novel coronavirus fatalities than the severe acute respiratory syndrome (SARS) outbreak between 2002 and 2003. There are 37,198 people infected with coronavirus, according to China’s National Health Commission.

To possibly prevent Chinese citizens from panicking or revealing to the world how bad the coronavirus outbreak in China is, the communist country has cracked down on anyone posting to social media. The South China Morning Post reported that China’s President Xi Jinping has directed the country’s internet watchdog to “tighten controls on social media platforms after a brief period of tolerance.” The Chinese government intends to “crack down on content that may sow fear and confusion amid the coronavirus crisis.”

A rare glimpse of how #CCP's internet police monitoring everything you are doing! 这个有点壮观。中共监视你在网上的一举一动。#InternetPolice in #China. #BigBrother is watching you. pic.twitter.com/eLVTgXPcUl

Despite the suppression of online expression, videos from mainland China have leaked to the rest of the world. The videos are extremely disturbing, and many are unverified because of fear of punishment from the Chinese government.

Jennifer Zeng is a human rights activist and author born in Sichuan, China. She was arrested four times by the Chinese government, and was sent to the Beijing Municipal Women’s Re-Education-Through-Labor Camp, where she alleges that she was physically and mentally abused.

Zeng, who earned a master of science degree in biochemistry at Peking University, has posted several alarming videos on Twitter displaying the alleged plight of Chinese citizens during the coronavirus outbreak.

Anyone who drives from ##Hubei & #Wenzhou to #Ningbo will need to be quarantined here for 14 days. The wide trenches ensure nobody can escape. #coronovirus 从宁波高速下来的湖北人、温州人全部住军队统一帐篷，隔离14天，挖沟防逃跑，军队把守，小康最佳模式—就是集中营 #武漢肺炎 pic.twitter.com/gIL9kdOIyM

Footage shows citizens being forcibly apprehended by people in hazmat suits. The people are reportedly being sent to hospitals against their will.

Woman fighting fierecly, with a knife, against forced quanrantine, one of the many scenes in #China during #CoronavirusOutbreak. It was said she got taken away nevertheless. #Coronavirus #coronaviruschina 女子揮刀反强制隔离。据说最后还是被制服带走了。#武汉肺炎 #新冠肺炎 pic.twitter.com/s0PlWVIaXK

It is not a normal reaction to fight with every fiber of your body to being “taken to a hospital.”

Some of those hospitals that the people are physically forced to go to, don’t appear to have any medical equipment. The 2019-nCoV is a respiratory disease that causes pneumonia-like symptoms, and those infected would likely need a ventilator machine or ECMO machine.

Inside #Wuhan makeshift hospital during fight against #coronavirus pic.twitter.com/Gsd3bbvZfS

Also, a hospital built in 10 days that will solely handle coronavirus victims has bars on the windows and slots for food to be sent through. Why would a hospital have bars on the windows? Are people breaking into the place housing people infected with a deadly disease that is easily transmitted?

Some Chinese citizens are reportedly being arrested for not wearing a mask.

Woman says she doesn't want to live anymore when arrested by police for not wearing a mask. Onlookers all blame her, one of the many scenes in #China during #CoronavirusOutbreak. 女子不带口罩被抓，说自己没钱，不想活了。#武汉肺炎 #新冠肺炎 #全民反抗 #全民自救 pic.twitter.com/HixwbyPCNX

While others were arrested for driving during the transportation ban.

In Heilongjiang province in #China , woman pulled out of her car and taken away in police van. Looks like she had lost consciousness. Police say she didn’t observe driving ban, she says she did not receive the notice. One of the many scenes during #CoronavirusOutbreak pic.twitter.com/SwIvQO6zLn

Apparently, some Chinese citizens are being forced into the isolation of their own homes.

China is a dystopia. pic.twitter.com/FMZtBq3TCk

There are unverified videos of metal bars being put on apartment doors to prevent people inside from leaving.

And another video footage of Chinese government officials sealing of a door of a resident living in a apartment in the #Hubei province, having been infected with the #CoronaVirus in #China. pic.twitter.com/Y8MuHrUdJs

And a other video footage of Chinese military shutting a door of the main entrance of an entire apartment building somewhere in the #Hubei province in #China, after at least 1 or more people have been diagnosed with the #CoronaVirus. pic.twitter.com/G0u3SMXqkh

and another video footage of government officials ordering a person to weld a door shut of a entire apartment building somewhere in #China, after 1 or more people were diagnosed with the #Coronavirus in the building. pic.twitter.com/KmhyifR97y

The sign is saying “Wuhan people live here, keep out”
The door to the apartment is sealed by metal bars.
The fear of #WuhanCoronavirus went absurd in China. Wuhaners are no longer seen as human but virus itself！#coronavirus #ChinaCoronaVirus pic.twitter.com/nZSB0rvwpo

The city of Wuhan, that has a population of 11 million, has been reduced to a ghost town, as seen in this haunting drone video. The Chinese government put Wuhan, which is the country’s seventh-largest city, on lockdown in mid-January. But it is speculated that five million people vacated the city before the transportation ban and quarantine.

Another video shows the citizens of Wuhan attempting to support each other with screams of encouragement. Wuhan is believed to be the epicenter of the coronavirus outbreak, specifically the city’s animal market.

People in #Wuhan shouting together from their apartments last night. Some say they shouted to pay tribute to Li Wenliang, who first exposed #CoronaVirus Outbreak, and who died yesterday. What they shouted though, is "Wuhan, Add oil", meaning keep fighting, pump up, or cheer up pic.twitter.com/3eYG9lKuIV

Yet another video shows a woman allegedly screaming for someone to please help her “dying husband.”

Woman shouting desperately at her balcony on an apparently locked down building:” My husband is dying! Help! Can somebody come? Help! Sorry, I don’t want to harass you, but I really don’t know what to do Who can help?” One of the many scenes in #China during #CoronavirusOutbreak pic.twitter.com/qRiIV1O6v0

A heartbreaking video shows a Chinese nurse being forced to give her daughter an “air hug.”

According to the New York Times, the Hubei Province is offering cash rewards to any citizens who report anyone with a fever, whether it be them or someone else.