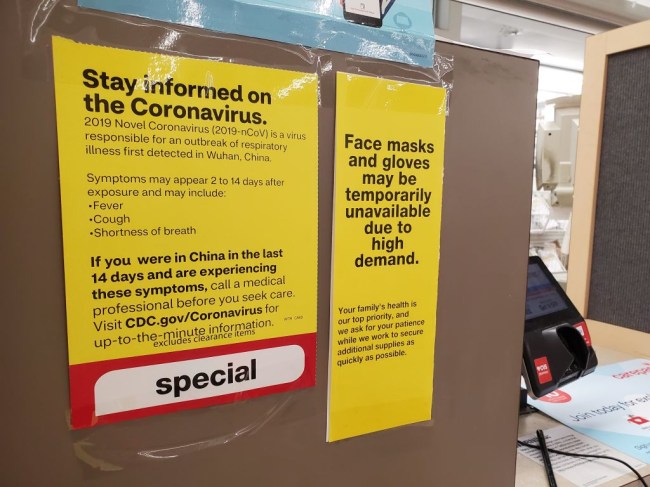 Wednesday was the deadliest day in the coronavirus outbreak, with at least 242 deaths in the Chinese province of Hubei alone. The previous highest death day was Monday, with 103 fatalities.

The latest update shows an explosion of new cases in Hubei, with 14,840 people diagnosed with COVID-19, according to China’s health agency. This increases the death toll in China to over 1,350, and over 60,000 confirmed coronavirus cases. Hubei accounts for more than 80% of China’s total COVID-19 cases.

China claims that the news of skyrocketing coronavirus cases is because the country changed the diagnostic criteria for counting new cases.

A Chinese woman was diagnosed with the coronavirus in London this week, and she is being quarantined in a hospital for at least 14 days.

The Centers for Disease Control and Prevention (CDC) confirmed the 15th case in the United States. The victim is a recent evacuee from Wuhan who was quarantined at the Joint Base San Antonio-Lackland in Texas. The patient has been isolated in a Texas hospital.

The victim has been under federal quarantine since arriving in the U.S. from China on February 7, the CDC said.

The unidentified patient is the third person under quarantine to test positive, joining two people at a base in San Diego who were confirmed to have the virus this week. In its statement announcing the case, the C.D.C. said that there would likely be more cases over the next few days and weeks.

More than 600 people who left Wuhan after the outbreak began remain under mandated quarantine at military bases in the United States.

The CDC warned that “there will likely be additional cases in the coming days and weeks, including among other people recently returned from Wuhan.”

“I think it’s way too early to try to predict the beginning, the middle or the end of this epidemic right now,” said Michael Ryan, head of WHO’s health emergency program.

A Chinese video blogger in Wuhan, who was one of the first people to raise awareness about the growing threat of the coronavirus, has disappeared. Fang Bin, a citizen journalist, who has brought a spotlight to the conditions of overcrowding hospitals in Wuhan and criticized the Chinese government’s medical response to the outbreak has gone eerily silent on social media.

Fang posted many videos of the coronavirus epidemic in Wuhan, including footage from hospitals and scenes of body bag piles in a van. In a video from early February, Fang said that he was briefly detained and questioned by government officials. Many believe that Fang was detained by Chinese authorities for being outspoken about the government.

His last video was posted on Sunday, and had a piece of paper with the written message: “All citizens resist, hand power back to the people.”

Virtually imprisoned at home, #FangBin, who shot that viral "8 bodies in 5 minutes" video of #Wuhan hospital, says the only reason the police hasn't broken in is the world's attention. He cannot stop speaking out. "If they don't come to me, they'll turn to you." #Coronavirus pic.twitter.com/oa95mDNgXF

China’s city of Huanggang, near the epicenter of the outbreak of the coronavirus, said that it would “tighten epidemic control measures,” according to CNBC. As of Friday, the city would begin to “seal residential complexes and only allow essential vehicles on roads.” The government statement read: “Food and the delivery of other essential goods will be arranged by designated personnel.”

One possible bright spot in the coronavirus outbreak is that a laboratory claims to have discovered a COVID-19 vaccine, and did so in only three hours.

A laboratory in San Diego for Inovio Pharmaceuticals, alleges that their scientists have developed a vaccine within three hours after gaining access to the genetic sequence of the COVID-19 on January 9, 2019. Now the scientists are working on releasing a vaccine for the coronavirus, which could be ready as soon as this summer.

“We have an algorithm which we designed, and we put the DNA sequence into our algorithm and came up with the vaccine in that short amount of time,” said Inovio’s research and development director Dr. Trevor Smith.

“Inovio’s participation in this developing effort is based on the ideal suitability of its DNA medicine platform to rapidly develop vaccines against emerging viruses with pandemic potential, proven vaccine development capabilities, and a strong track record of rapidly generating promising countermeasures against previous pandemic threats,” Inovio Pharmaceuticals said in a statement on January 30. “Inovio was the first to advance its vaccine (INO-4700) against MERS-CoV, a related coronavirus, into evaluation in humans.”

The Pennsylvania-based pharmaceutical company is partnering with China’s Beijing Advaccine to develop the vaccine.