Cows Are Wreaking Havoc On Beaches In Corsica, One Visitor Gored In The Neck 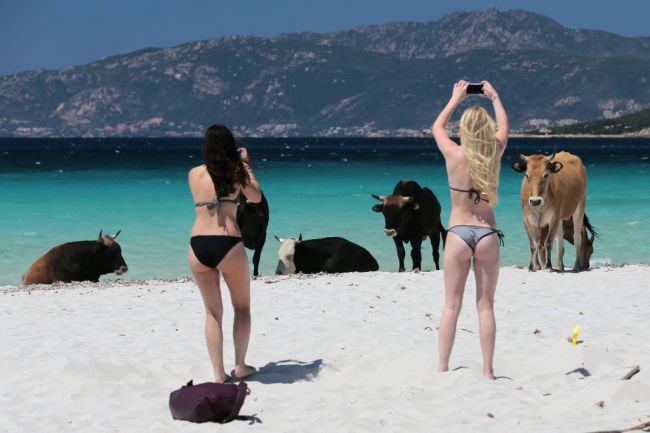 Instead of beachgoers having to worry about jellyfish or sharks, those in Corsica have to keep their heads on a swivel for cows while lounging on the sand.  Cows have quite literally taken over beaches in Corsica, and they aren’t friendly, either.

The Mediterranean island has more than 15,000 cows and they’ve apparently been put in a bad mood after not seeing many beachgoers due to lockdown for the last year-plus.

According to the Times of London, one man was sent to the hospital after being gored in the neck while on a beach in Lotu. The cows are also making their presence be known in town as well. Cows have been spotted running tourists down streets and one woman was air-lifted to a hospital after suffering a ‘sever leg wound’ via a cow while she as hanging her laundry to dry.

The Cows Could End Up Killing Someone

“The lady was wounded two centimeters from the femoral artery,” Lozzi mayor Francois Acquaviva told local newspaper Corse. “If this goes on, there will be deaths.”

“Tourists laugh at this as folklore and take pictures, but it’s a real pest,” a local councilor told the paper, and one animal rescue official warned: “When you see that [the cows] are heading in a particular direction, it is best to give them priority.”

You can’t blame visitors that take pictures of cows just like the women in the photo above are doing. Look at how unbelievable that water is, and all of the sudden there’s a group of cows just running down the beach, that’s not something you see every day.

The cows were also spotted rampaging through picnics like seagulls normally do, but instead, these animals have horns on them that can kill you. Corsica is also the place where Conor McGregor was arrested for indecent exposure and suspicion of sexual assault.