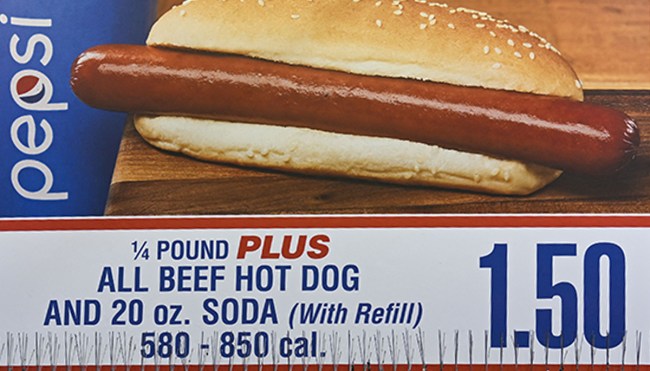 Ben Franklin famously said that the only things that are certain in life are death and taxes in a letter he penned to a French physicist in 1789. However, if he’d managed to hang around for another 230 years or so, I think he would’ve added one more entry to that list: the price of the hot dog and a drink combo at Costco.

Costco has been offering that iconic pairing for $1.50 since 1985, and it’s long served as the light at the end of the tunnel for anyone who’s had to spend an hour trying to navigate an oversized shopping cart through the maze of one of its crowded warehouses.

Jim Sinegal, the Costco co-founder who formerly served as the company’s CEO, was a devoted advocate of the famous loss-leader to the point where he once told someone who suggested increasing that number, “If you raise the price of the f—king hot dog, I’ll kill you.”

As a result, seeing anything but $1.50 on the board at the food court would be one hell of a Canary In The Coal Mine Moment. As a result, it was easy to understand why people freaked out over some Fake News that made the rounds in May thanks to a tweet claiming it would be increased to $2.50 as a result of inflation.

However, Costco did hike the price of its chicken bake and a standalone soda earlier this month, which naturally led to some speculation the hot dog deal could suffer the same fate.

On Monday, current CEO Craig Jelinek addressed those concerns during an appearance on CNBC, as he only needed a single word to ask if any amount of inflation could impact the price: “No.”

CEO Craig Jelinek had a one-word answer when asked whether he would raise the signature food court item’s price: “No.” https://t.co/GFWrixlv4d pic.twitter.com/BZ2OIptOUp