Viral Video Shows Couple Helplessly Watching Their Cruise Ship Leave Without Them, Stranding Them In The Caribbean 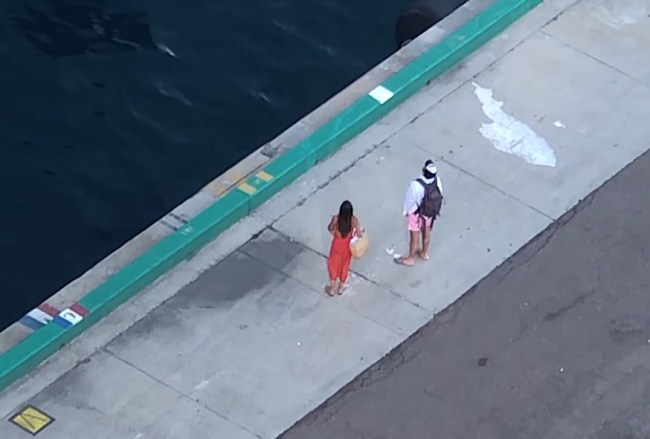 Royal Caribbean’s Symphony of the Seas cruise ship was in the Bahamas two weeks ago. The cruise ship docked at the Nassau port, but had a departure time of 3:30 pm on February 15th. At 4:15 pm, the gangway was removed and the doors were closed. A couple of passengers arrived five minutes later. They literally missed the boat.

The Symphony of the Seas is a mega-ship that accommodates 5,518 passengers, so there’s no waiting for just two people. Passengers on the neighboring Norwegian Cruise Line’s Bliss cruise liner captured the moment they arrived and the five minutes following that they had to watch their cruise ship sail away.

You know at one point they were probably super hopeful and thought if they just get the attention of the captain that the ship will reopen the gangway. Then only minutes later, when they heard those side thrusters start blasting, their hope sank faster than the Titanic and coming to the realization that they would miss that night’s chocolate fountain.

The video was released 10 days ago and it already has over 1.1 million views. This was the sixth day of the seven-day cruise. The two passengers were then stranded in the Bahamas, which isn’t the worst of places to be stranded. However, now they’ll have to find their own way back to Miami, Florida to pick up their luggage that was left on the ship.

When you’re 50 minutes late back to your cruise ship, you end up saying “bon voyage” to your cruise ship. For nice people, you may find the six-minute video to be painful, but everyone else will find the footage to be hilarious. This couple should have skipped that last round of tequila shots and having a Bahamian conch salad to be made tableside.

A special dedication to the couple who missed the boat.