Total Psycho Gets Bitten By The GIANT Desert Centipede, A Bite More Painful Than A Rattlesnake 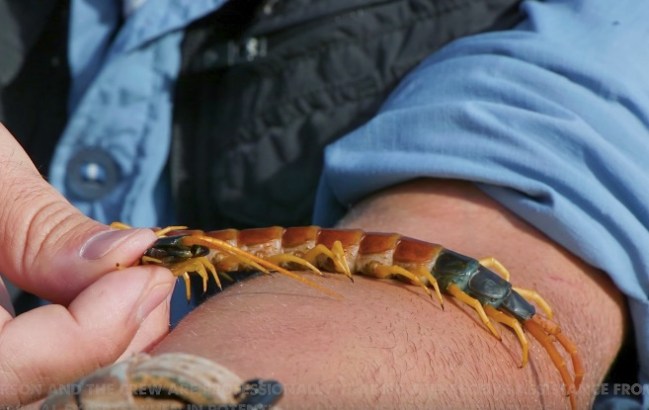 Coyote Peterson is an absolute madman. He’s voluntarily taken a bite/sting from the most painful creatures on planet earth all in the name of YouTube views. Seriously, for a YouTube video, he once took a sting from a Bullet Ant which is said to be more painful than being shot with a gun. He’s also handled Black Widow spiders with his bare hands. Like I said before, Coyote Peterson is certifiably insane.

In the latest clip on his Brave Wilderness YouTube channel, Coyote Peterson is venturing past the point of sanity. He’s voluntarily taking a sting from the Giant Desert Centipede. This is a horrifying creature which is said to have a sting more painful than the venomous bite of a rattlesnake. So without further ado, here’s Coyote Peterson making another terrible life decision:

Just how creepy is the Giant Desert Centipede? Well, this is a creature that Coyote Peterson himself described as a ‘living nightmare‘ in a video posted to the Brave Wilderness YouTube channel all the way back in 2014. So this is an absolutely horrifying creature which has been on Coyote Peterson’s radar for years. One that he’s been afraid of coming in contact with and taking a bite until now.

As for how excruciatingly painful the bite from a Giant Desert Centipede is? Luckily for everyone these creatures really only exist in the Southwest and bites on humans are so rare that there’s really not even any data out there on how many people get bitten per year. What freaks me out though is there are forums out there on the web which tell you where you can purchase these freakishly terrifying creatures as pets.