Not Sold On NFTs Yet? Croatian Tennis Player Sells Patch Of Her Arm For $5,000 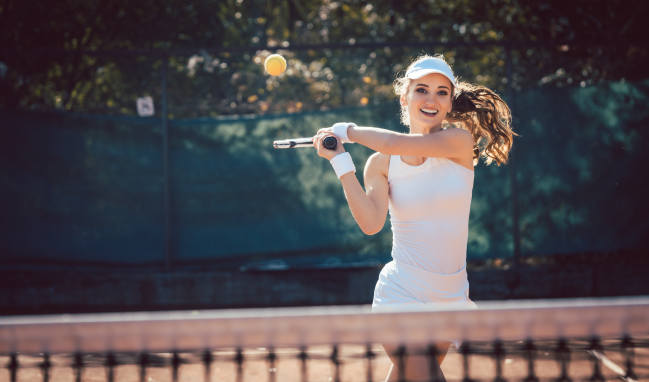 The next chapter of NFTs has been written, or will be written, in tattoo ink. On the arm of a Croatian tennis player named Oleksandra Oliynykova. For the small sum of $5,000.

Six days after putting it up for auction on the popular NFT marketplace OpenSea, Croatian tennis player Oleksandra Oliynykova sold exclusive lifetime ownership of part of her right arm for more than $5,000. https://t.co/eliYyoQ7bM

Six days after putting it up for auction on the popular NFT marketplace OpenSea, Oliynykova sold exclusive lifetime ownership of part of her right arm for more than $5,000.

Oliynykova, who ranks 30th in the International Tennis Federation (ITF) World Tour and 658th in the Women’s Tennis Association (WTA), specifically sold the section of skin between her elbow and shoulder on the inside of her right arm, where the owner can commission a tattoo or temporary body art.

“I will bring your art object or message to every tennis court I play,” Oliynykova wrote in the listing. “As I am 20 years old only and my sports career is on the rise, I believe it’s [going to] be the biggest tennis locations in the world.”

“It is actually a part of sports history, not as a tattoo, but as a successful attempt of an individual athlete to directly interact with their fan base. In several years, independent athletes will extensively use NFTs [and] career tokens, but I will always be the first who did it.”

Exclusive lifetime ownership of a piece of your body sounds a lot worse than it actually is. That’s kind of the same exact idea behind marriage. From this day forward, you own the exclusive rights to my dong/poon, unless one of us decides to be unfaithful, which happens… constantly. It’s still the basic idea though.

Now, Oleksandra (can I call ya Oleks for short?) clearly doesn’t have an issue with tattoos:

2006 really getting prime billing. It’s the year she started playing tennis. Makes you excited to see what she’ll do to mark the year she wins a title. If it’s Wimbledon, will she sew a patch of grass into her back? Fingers crossed.

As NFT ideas go, this isn’t the worst. The human body is a limited canvas. Only so many spots you can tattoo. And if young Oleks turns out to be the next Steffi Graf, that NFT will, probably, appreciate in value.

So here’s the $5,000 question: do you get her to tattoo your brand, or name, now? Or do you leave the space blank, hope that she becomes a massive tennis star, and sell the blank space for a profit? If you have her ink your tattoo now, it’s like taking the sneakers out of the box and wearing them outside. But if you wait, she could flame out, get injured, lose interest in tennis, etc. and the space could be worth nothing. Seems like a coin flip to me, but I haven’t seen her play.

Right now she’s ranked 658th in the world. But she’s only 20. Then again, Serena won her first grand slam at 17. If nothing else, Oleksandra has generated a lot of buzz over this arm NFT. That has to be worth something.